A Discovering Diamonds review of Sunday's Child by Rosemary Morris 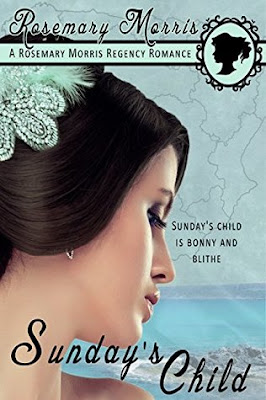 Amazon UKAmazon USAmazon CAAmazon AUGoodreads
Fictional Drama
Regency 1800s
England
“Georgianne Whitley’s beloved father and brothers died in the war against Napoleon Bonaparte. While she is grieving for them, she must deal with her unpredictable mother’s sorrow, and her younger sisters’ situation caused by it. Georgianne’s problems increase when the arrogant, wealthy but elderly Earl of Pennington, proposes marriage to her for the sole purpose of being provided with an heir. At first she is tempted by his proposal, but something is not quite right about him. She rejects him not suspecting it will lead to unwelcome repercussions. Once, Georgianne had wanted to marry an army officer. Now, she decides never to marry ‘a military man’ for fear he will be killed on the battlefield. However, Georgianne still dreams of a happy marriage before unexpected violence forces her to relinquish the chance to participate in a London Season sponsored by her aunt. Shocked and in pain, Georgianne goes to the inn where her cousin Sarah’s step-brother, Major Tarrant, is staying, while waiting for the blacksmith to return to the village and shoe his horse. Recently, she has been reacquainted with Tarrant—whom she knew when in the nursery—at the vicarage where Sarah lives with her husband Reverend Stanton. The war in the Iberian Peninsula is nearly at an end so, after his older brother’s death, Tarrant, who was wounded, returned to England where his father asked him to marry and produce an heir. To please his father, Tarrant agreed to marry, but due to a personal tragedy he has decided never to father a child. When Georgianne, arrives at the inn, quixotic Tarrant sympathises with her unhappy situation. Moreover, he is shocked by the unforgivable, brutal treatment she has suffered. Full of admiration for her beauty and courage Tarrant decides to help Georgianne.”
First of all, I do think the above ‘blurb’ (taken from Amazon) is far too long, and a little tedious to read – a book description needs to be a short outline to tempt a potential reader in, not a long and involved synopsis of the story which could put someone off.
However, the novel itself was not far too long or a little tedious – quite the opposite in fact!
Set against the ongoing upheaval of the Napoleonic War and the approaching culmination of the Battle of Waterloo we meet Georgianne Whitley who is having to come to terms with the deaths, in battle, of her father and brothers and the trauma that her mother and younger sisters are subsequently feeling. When our anti-hero the Earl of Pennington appears, things get tougher for our heroine – and the difficulties do not end there. Georgianne is strong in character and will - but is she strong enough to survive all that is thrown at her?
This was a time when men controlled women, when fathers, brothers, husbands, went off to war and often, never came back, leaving their womenfolk to survive as best they could. Or not, as the case may be. A time when arrogant men could ruin their female kindred for the purpose of their own gain, be it for  financial profit, the gaining of property, or a subservient wife to provide an heir, sexual pleasure, but nothing else.
The author does a superb job of creating this period, of researching the details of life during the 1800s, and of the plight of women who were left at the mercy of their kinsmen.
Reviewed for Discovering Diamonds
© Anne Holt e-version reviewed