A Discovering Diamonds Review of Kelegeen by Eileen O’Finlan 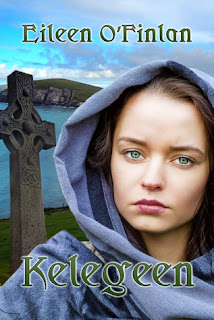 Amazon UKAmazon USAmazon CAAmazon AUGoodreads
Family drama
1845-1852
Ireland
Kelegeen by Eileen O’Finlan is a story that takes readers into the most depressing and devastating events during the Great Famine, also known as the Gorta Mór, in Ireland. The story focuses on Meg O’Connor, Rory Quinn, their families, Father O’Malley, and the British Dr. Parker. As O’Finlan tells the story of the Irish during this time period, readers get a broad, but heart wrenching, overview of how the potato famine, politics, and social injustices all played a part in shredding the lives of the characters who called this small Irish village home.
Historically, the Gorta Mór was one of the most miserable times of Irish history, bringing death to over a million people and causing many more to emigrate to the Americas in search of hope and salvation. Brought about by a series of both natural and man-made events, the story captures the hardships of Ireland as a whole, as well as the personal and intimate losses of the people.
O’Finlan’s passion for the characters in her story, and their lives, is the story’s strength and what moves it forward. Her aspiration to present an historical account of how the Gorta Mór changed the lives of the Irish is felt through the use of words. She paints vivid and horrific pictures of how broken, demoralized, and fraught the people were during this time, which can be a somewhat dark and depressing experience for the reader as well. Which while a little disconcerting, maybe, does truly reflect the reality of the subject.
While O’Finlan did a great job bringing the dark side of the people and the times to life through her use of graphically raw descriptions, the story could have been strengthened with equally strong portrayals and well-defined examples of the positive aspects of Irish strength and perseverance. Even though O’Finlan dimly weaves some hope into the story, the eerie shadows overpower hope and faith throughout most of the book. It is in the last pages of the story that O’Finlan starts to focus on some of that hope and faith. Even then, she perpetuates the novel's darkness by subtly victim blaming the characters.
O'Finlan provides a good deal of information compressed into a story that really affected millions of people over eight years in time. I would recommend that readers be prepared to read this story in short pieces to allow breaks in between to reflect on the characters' trials and tribulations, and to heal from their own emotionally frayed hearts.
I would recommend for readers who are interested in this particular period of Irish history, but maybe it is not for anyone who prefers a lighter read.