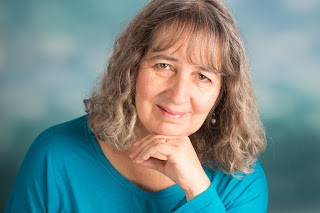 Hello Deborah, welcome to our Discovering Diamonds Guest Spot. Along with my readers and visitors I love to hear from authors who write wonderful stories. There’s nothing better on these long, cold winter evenings, than curling up with a good book in front of a cosy fire, box of chocs and glass of wine to hand. (Unless you’re in the southern hemisphere, in which case it’s still the wine, but a platter of cheese, crackers and grapes to hand, while stretched out in a deckchair in the garden on a warm, sunny, evening...)
Q. Would you like to tell us a little bit about yourself...
A. I’m the author of thirteen, soon to be fourteen, published novels, which seems quite amazing considering I initially set out to be a poet. That changed when my daughter left home and I found I’d enough time to write longer things – and by longer, I mean books of 400 or so pages. My poems were usually sonnet-size, so this has been a big change in output!
Q. Where do you live?
A. I live in North Lancashire on the Cumbria border, close to the fells and the sea. There’s a crag behind my house which gives a view over Morecambe Bay, and has been my regular daily walk since lockdown. Getting very blustery up there now, though.
Q. If you had a choice to live anywhere – where would it be?
A. Very happy exactly where I am. Though I also love the coasts of Wales and Cornwall.
Q. Modern house, old cottage, castle or something else?
A.  Definitely old cottage. Castle – much too draughty. Modern house – so many are ugly and look like portacabins.
Q. Cat,  dog or budgie?
A. Cat. We lost ours to old age just before lockdown and still miss her.
Q. Are you a ‘dining room for dinner’, or a ‘tray on your lap in front of the TV’ person?
A. The kitchen – less distance to carry the pots! Not a TV dinner fan unless it’s a special occasion.
Q. TV preferences – documentary, drama, comedy, soap or thriller?
A. Documentary and drama. Favourite Documentary series right now is Storyville. The recent one about the fire at Notre Dame was superb.
Q. What was your first published novel about?
A. It’s called The Lady’s Slipper and is about a rare orchid that became extinct (or so they thought) in 17th Century Cumbria. It’s set just after the English Civil war.
Q. What was your last novel about?
A. Just out – The Lifeline is about the link between Shetland in Scotland and Norway during WWII. It tells interlinked stories about a woman teacher on the run in Nazi-occupied Norway and the wireless operator in Shetland who goes to rescue her. 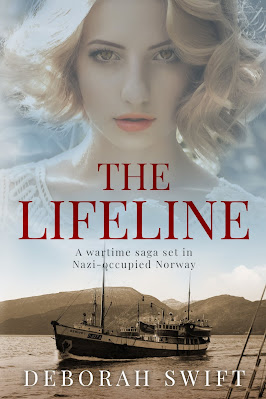 Q. Do you write in one genre or several?
A. Only historical fiction – but in two distinct eras, the 17th Century and WWII. Don’t ask how I ended up doing that – it wasn’t really a plan, it just evolved!
Q. Have you ever considered exploring a totally different genre?
A.  No. I love my history!
Q. If you could, which two of your characters would you like to invite to spend an afternoon with you?
A. I’d choose Samuel Pepys so I could introduce him to today’s government. I’d like to see him sat in the House of Commons and see how he got on arguing with the current lot and having a conversation about Brexit. Though I don’t think I’d want to spend an afternoon with him. In terms of who to spend an afternoon with, I’d choose Elspet Leviston from A Divided Inheritance. She’d have some interesting travel tales to share with me about her hair-raising times in 17th Century Seville.
Q. Where would you go / what would you do?
She’d be rather amazed if I took her to Blackpool Illuminations, given there was no electricity in her world!
Q. How do you prefer to travel? Plane, boat, car?
A. Car, so I can choose my own music or talking book.
Q. You are out for a walk. You see a chap sitting on a wall, looking right fed up – but there’s something odd about him... What? And what  do you do?
A. He has rather large feet and very hairy ears and is only about 3’6” tall. I tell him he’s got lost and point him back to The Shire. Or alternatively I could take him to Manchester airport and put him on a flight to New Zealand.
We have a long-running Radio programme here in the UK called Desert Island Discs on which celebrities talk about their life and select eight of their favourite discs... so changing that slightly...
Q. If you were shipwrecked on a desert island, what eight books would you want to find left in an abandoned hut? (There’s already a Bible, the Quran, and the complete works of Shakespeare)
1. Jane Eyre
2. The Survival Handbook (Ray Mears)
3. Great Expectations
4. The Sea, the Sea
5. The Four Quartets
6. A Fine Balance
7. The Game of Kings
8. An empty book so I could write my own (is that cheating?)
Q. What sort of island would you prefer, and why? (e.g. Desert Island... Hebridian Island...)
A. Not good with cold, so it would have to be somewhere warm. Some sort of idyllic tropical island with a nice beach!
Q. And you would be allowed one luxury item – what would you want it to be? (a boat or something to escape on isn’t allowed.)
A. Tea. A watertight and bugproof chest of PG tips. Couldn’t carry on without my cuppa.
Book Link for The Lifeline mybook.to/TheLifeline
Twitter @swiftstory https://twitter.com/swiftstory
Facebook: https://www.facebook.com/authordeborahswift/
Website www.deborahswift.com
Click HERE (and scroll down to 'S') to find our  reviews of Deborah's books  on Discovering Diamonds
See Our Full
GUEST LIST