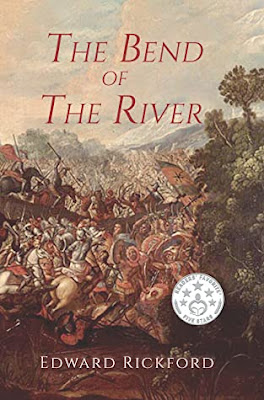 Amazon UKAmazon USAmazon CAAmazon AUGoodreads
Fictional saga / military1500sMexico
One of the benefits of reading good historical fiction is that it transports you through time as effectively as a Tardis. Mr Rickford is evidently extremely knowledgeable about the events he describes, but he adds depth to the narrative by painting the landscape, the architecture, the food and the culture of the people whose destruction he depicts. The Bend of the River is a eulogy over the Mexica, the ruthless and powerful Native American people we usually call the Aztecs.
It is 1520 or so and the ambitious and greedy Hernán Cortés is marching towards Tenochtitlán, the capital of the Mexica empire. Along the way, he uses a combination of intimidation and bribery to make allies out of other native people, entering Tenochtitlán at the head of an army numbering more than 6,000 men. The Spanish are few—no more than a couple of hundred or so—but they have two fearsome weapons: horses and firearms. Still: it would be an easy matter for the Mexica to vanquish them, but for some reason the Mexica emperor, Moctecuhzoma, chooses instead to treat Cortés as a guest—at least initially. By the time he realises his mistake, it is too late—for the Mexica people, for their empire and for Moctecuhzoma himself.
Why Moctecuhzoma  chose not to annihilate Cortés and his men is one of those historical mysteries that have fostered much speculation. Mr Rickford gives a feasible explanation for Moctecuhzoma’s actions, presenting the Mexica emperor as a reflective and intelligent man. The author does not shy away from the bloodier aspects of the Mexica culture, but if we’re going to be honest, the Spanish aren’t much better, so driven by their hunger for gold they happily wade through bodies to get it.
Mr Rickford delivers a gripping read, populated by a vibrant cast of characters. Standing head and shoulders above the supporting cast are Hernán Cortés, an intriguing mix of greed, curiosity, determination and faith, and the ultimately fallible Moctecuhzoma.
For those who enjoy fast-paced action firmly grounded in historical facts, this is an excellent read, with the one caveat that it is best to read the first book in the series first, (The Serpent And The Eagle) as The Bend of The River starts off rather abruptly, taking off from where the previous book ended.
Still: as something of an aficionado of Latin American history, I can but doff my cap to Mr Rickford and thank him for bringing all this turmoil into such vivid life!
Reviewed for Discovering Diamonds
© Anna Belfrage
e-version reviewed