Sons of Rome by Simon Turney and Gordon Doherty

Happy New Year to all our
visitors, readers, authors & reviewers.
* * *
Book of the Month 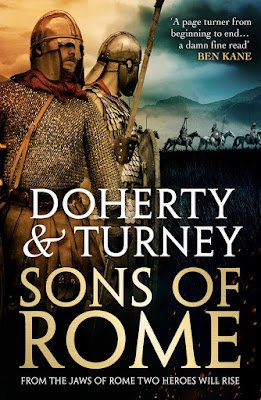 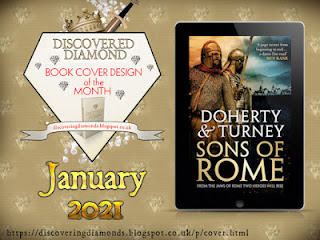 Fictional Saga
Rome
400s / 3rd Century AD
If you read historical fiction set in Ancient Rome, this will be the book not to miss. If you can only afford to buy one book in this genre, spend your pennies on this one.
Many of us will recognise the name of Constantine, known later as ‘the Great’ and the emperor who made Christianity the Roman Empire’s established religion. Maxentius is a much lesser known figure – the sources are very sparse – yet was an important player in the late third century AD. Systematically vilified over time as a cruel, bloodthirsty and incompetent tyrant, Maxentius was deemed to have been hostile to Christianity as well. But we know how official propaganda works…
A more extensive use and analysis of non-literary sources such as coins and inscriptions have led to a more balanced image. Maxentius was a prolific builder, whose achievements were overshadowed by Constantine's issue of a damnatio  memoriae against him. Many buildings in Rome commonly associated with Constantine, such as the great basilica in the Forum Romanum, were in fact built by Maxentius.
Back to our book. Doherty and Turney are two established authors who write fluently and authoritatively in their genre, each with an impressive body of work to date. Together they have brought their talents to this clever book. Doherty as Constantine and Turney as Maxentius means that each protagonist has a clear voice and personality. The authors have avoided the mess and muddle that collaborative works can become caught in when switching scenes and characters. They have added a detailed and perceptive historical note to complement the story.
We see Constantine and Maxentius, both sons of emperors, grow more complex as they become young men and adults. Yet they are constrained by their personalities, their elders and sometimes their invidious position as perceived threats to the status quo merely by their existence. Their personal trials in a time of the empire tearing itself apart through the machinations of ruthless power players are interwoven with their political ones which eventually come to mean a matter of survival.
Although Sons of Rome is only Book 1 in The Rise of the Emperors series, the story is so well-crafted it finishes conclusively. I can’t wait for Book 2 – Masters of Rome!
Reviewed for Discovering Diamonds
© Alison Morton