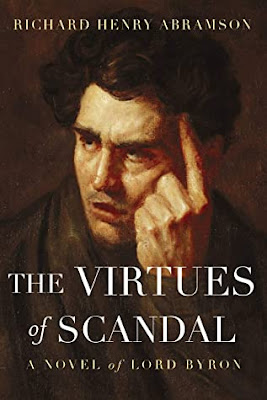 Amazon UK
Amazon US
Amazon CA
Amazon AU
Goodreads
Alternative
1800s
Europe
George Gordon, the 6th Lord Byron, was a gifted poet with some appalling habits. Even by modern permissive standards he was a libertine and something of a rotter to boot. It is this latter aspect of Byron – famously described as ‘mad, bad, and dangerous to know’ – that author Richard Abramson has chosen to bring to the forefront in The Virtues of Scandal.
The story opens with a fictional scene towards the end of Byron’s life when he is wounded in a swordfight with a Turkish janissary in Ottoman Greece. Byron slays the Turk, but is gravely wounded in the process. The author then takes us into an Assembly Room scene in London where a much younger Byron is trading wit and insults with William Wordsworth and poet laureate Robert Southey. Here, we also meet Byron’s one-time mistress Lady Caroline Lamb, the wanton young wife of the (then) rising Tory politician Lord Melbourne. These two contrasting episodes set the reader off on adventure across Europe to Constantinople and Greece, taking in St Petersburg and the fictional dalliances of Don Juan in Spain along the way. The plot and timeline are a little hard to follow initially as Byron careers between salon small talk, arguments with his publisher and prose scenes based on ‘Don Juan’ cantos, but the pace keeps the narrative alive.
While it does get a little confusing at times Abramson’s use of language brings each scene to vibrant life and, gradually, we get a clearer picture of the complex poet and the complicated times in which he lived. We see how literary success ironically led to debt, and how his personality and caustic wit constantly make him new enemies and then how all this lands him in international political affairs relating to the nineteenth-century ‘Turkish problem’.
Abramson deftly weaves fact and fiction together using snippets from genuine correspondence and sections from the cantos to create a tale of immorality, betrayal and surprising self-effacing courage.
Three narratives are developed and interlaced to form a story that spans a decade and includes young Don Juan himself. The prose is rich; characters, settings and situations come to life on the page. Secondary and minor characters are rounded, although in some cases, such as that of William Wordsworth, whom Byron famously mocked for being ‘simple’ and ‘dull’, they are over-fictionalised for this reader.
Herein lies one of the dilemmas of historical fiction: to what extent can or should authors depart from documented events and/or scholarly biographies of eminent figures? Abramson stresses in his subtitle that this is ‘A Novel of Lord Byron’ but I think this particular story may entertain readers who know less about the period and personae than those who know more through academic study or wide reading. The voices of a few characters did not ring true for me because I had studied them previously.
In The Virtues of Scandal debut author Richard Abramson gives us an entertaining version of a life Lord Byron could have led. It might have been better, however, to warn readers at the beginning that this a form of alternative fiction and that he had changed how Byron died. The poet was reported to have contracted a fever in Missolonghi, but not due to festering wound from a sword fight. He was then bled to death by misguided physicians. It has to be said, Byron’s extant letters and journals amply demonstrate his real life was the stuff of fiction anyway.
Reviewed for Discovering Diamonds