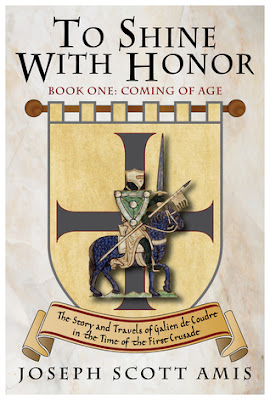 “A family of minor nobility, comes of age in the perilous world of late 11th century France, where powerful noblemen massacre the other and innocents in unending petty warfare over lands and silver, despite the efforts of the Church to control their violence. Galien, educated for the priesthood, trained at arms and horse by his father and older brothers, all knights, finds his once-certain future as a high Church official compromised by family misfortunes. Through a series of often violent events, he discovers his own destiny as events in France and the distant Holy Land draw inexorably toward the great war of faiths known in history as the First Crusade.”

The huge list of characters, and other information (except for the map) at the beginning of this debut novel is a little overwhelming, especially as an e-book version. (Lists never go down well in e-books as it is not as easy to flip backwards and forward on a Kindle as it is with a paperback – I do wish authors would remember this!) However, once into the story proper, the narrative gets going nicely. The characters are well drawn, the plot well thought out and the action progresses at a decent pace. As far as I can tell the research was fairly well done, although I did spot some anachronisms and a few factual bloopers, plus some mild continuity errors within the plot– but not enough to spoil the reading experience. (I would suggest the author finds an good editor experienced in the period for his next publication.) There were also a few minor errors of grammar, punctuation etc, but I read a pre-publication ARC edition, so hopefully, these have been corrected in the final version.

What was particularly enjoyable was that the narrative covers the everyday life of the characters during the pre-Crusade period and during the events that led to that eventual Call To Arms. Presumably, the next in the series will continue with the next phase of this turbulent times. The author also focuses on the ordinary men (albeit the ‘Knight Class’ of men) rather than the usual point of view of the kings and nobility involved. It was somewhat refreshing to be down among the masses rather than in the leadership ranks. Interesting, too, to see how the traditions, etiquette and ‘chivalry’ of the knights began to emerge as the era and events progressed. Amis explores the complexity of life in the late eleventh century, avoiding the stereotypes of arrogant nobles or hard-done-by peasants.

In this debut novel the inexperience of the author does show in places, but there is promise here. Possibly an author to watch.