The Flame Within by Liz Harris 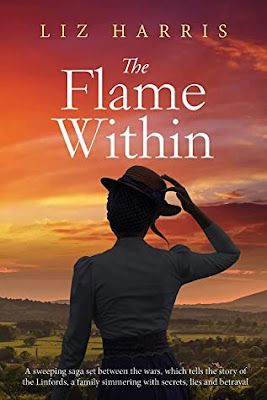 Fictional drama
1923
London
Linford Trilogy #2
"Alice Linford stands on the pavement and stares up at the large Victorian house set back from the road—the house that is to be her new home. But it isn’t her house. It belongs to someone else—to a Mrs Violet Osborne. A woman who was no more than a name at the end of an advertisement for a companion that had caught her eye three weeks earlier. More precisely, it wasn’t Mrs Osborne’s name that had caught her eye—it was seeing that Mrs Osborne lived in Belsize Park, a short distance only from Kentish Town. Kentish Town, the place where Alice had lived when she’d been Mrs Thomas Linford. Thomas Linford—the man she still loves, but through her own stupidity, has lost. The man for whom she’s left the small Lancashire town in which she was born to come down to London again. The man she’s determined to fight for."

It is often with a certain amount of trepidation that a reader opens the second instalment of a series – will it be as engrossing, as enjoyable? Will the characters and the events of their lives be as believable as the previous novel? No worries about any of that with book two of the Linford Trilogy – The Flame Within. Actually, I would go as far as saying it was even a tad better than Book One because I had already met the characters – but this one could just as easily be a stand-alone story for anyone who has not yet read Book One.

Slightly different to the usual run of a series, this second book runs parallel to the first, a simultaneous telling of the story as it unfolds, rather than running onward as a consecutive ‘what happened next’. The drama, from the different point of view of the characters is very cleverly done.

Back in 1918 Alice fell in love with Thomas Linford while he was recovering from injuries received during WWI. In 1923, she is his wife, but things are going wrong for Alice. Thomas is finding it hard to adjust to his disabilities and he is in the depth of feeling sorry for himself, enhanced by his resentment that his brothers did not go to war and are not suffering like he is. Divorce in the 1920s was not really an option, and so, inevitably, Alice starts an affair. Which is when the problems get worse for Alice. No spoilers about what happens next, except Alice has the courage to pick herself up and turn her face to the future. I really liked Alice and several times felt like muttering, ‘You go girl! Good for you!” She is ambitious, determined and brave, but perhaps too trusting of those who lie, betray or try to manipulate her.

Alice herself is a delightful character, Thomas, and his family – successful London builders – the sort you automatically despise. And then there is Alice’s family ... all of them are characters that grab hold and cling on to the reader’s interest because they come across as so believably real. Some of them we like, some we don’t. Some we cheer for, some we hiss and boo.

Ms Harris’s research is impeccable, both of life in London during the Great War, and its aftermath, and in the poorer communities of Lancashire. Her style is eloquent and passionate from the first, opening line to the last.

If I had to compare this novel to something from popular fiction I would immediately cite Catherine Cookson... although with the caveat that I think Liz Harris is even better than ‘Our Kate’.

© Helen Hollick
e-version reviewed
(there will be a short story about the Linfords in our December StorySong series - read the story, guess the song)