A Discovering Diamonds review of Age Of Druids by Christy Nicholas

A Discovering Diamonds Review of Age of Druids by Christy Nicholas 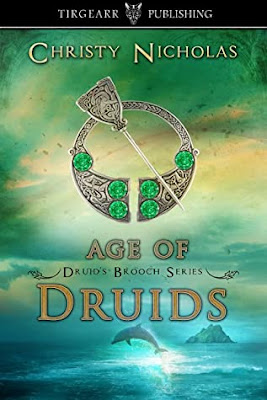 Amazon UK
Amazon US
Amazon CA
Amazon AU
Goodreads
Historical fantasy
Approx. 5th century
Ireland
Age of Druids is the ninth and final book in Christy Nicholas’s Druid’s Brooch series. In this instalment, readers are taken to early Christian Ireland, roughly 5th century, where Cliodhna struggles to come to terms with the new religion that is invading and pushing out her beloved old belief. She is accustomed to welcoming the day with the sun, feeling the spirit and energy of living things, and communicating with the Fae who live in the woods near her roundhouse. To her dismay, not only does the new religion have no place for the things she loves, but her two eldest children, nearly grown themselves, are drawn to this new faith and are changing because of it. On top of that, Cliodhna’s husband has been missing for months, adding a layer of suspicion through which the zealous abbot, Padraic, views her.
To try to hold on to her way of life, Cliodhna begins lessons with Adhna, a man of the Fae. He teaches her how to draw upon earth energy to revitalize plants and animals as well as to protect herself. Cliodhna soon finds herself drawn into Adhna’s world more deeply than she ever imagined possible. She will be forced to make a choice between the mortal world, full of strange new ideas and shifting loyalties, and the Fae world, utterly foreign and frightening.
It was interesting to see how the various threads from the other books in this series were entwined throughout this novel. We at last learn how the brooch was created and how and why it was gifted to Cliodhna’s family line to begin with. Learning how her family became connected to the Faerie realm was satisfying after so many books preceding it that hinted but never confirmed.
I have read many of Nicholas’s books and, while I greatly enjoyed this one, there were a few places, in particular scenes set in the Faerie realm, that I felt I had read before, although maybe it was just a function of having read the others and that Nicholas’s writing style has become so familiar. That is not in itself a bad thing.
The descriptions were all top notch, both in the mortal realm and in Faerie. I liked the diversity of characters and how they changed over time. The Christian monks in general, and the abbot in particular, were described in a negative way since they were seen primarily from Cliodhna’s point of view. This negativity was explained in a later part of the plot, but devout readers may be a little put off by this. The villagers had a few bright spots in terms of character development as well. Ita in particular was an interesting figure and I wish there had been more scenes with her. She added a nice counterpoint to Cliodhna, a good balance.
The ending felt a little abrupt, but it makes sense because now the timeline  of the plot has reached where it starts to move forward, rather than backward. Readers could enjoy the series in the reverse order of publication if they really wanted to and get a different view of this sweeping epic. I really loved the way the entire series moved backward through time to get to the genesis of the brooch that was central to the lives of the characters.
Overall, this novel is nicely done and provides a satisfactory end to the entire series. Definitely recommended for fans of historical fantasy and Irish culture.
Reviewed for Discovering Diamonds
© Kristen McQuinn
e-version reviewed