To The Great Army by N L Collier 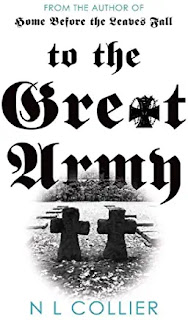 This is the fifth and final book in N L Collier's epic saga of the first World War. As with the other novels in the series, our narrator throughout is Franz Becker who is now an ace fighter pilot. His great friend, Karl von Leussow, lies in hospital and the relationship that was developed in Book Four comes to a temporary end.

So, let's get the first health warning out of the way: only the first book in the series can be deemed as a stand-alone. Each successive volume continues directly on from the previous. References to previous events and comrades will be lost on new readers.

This book follows the same format as the previous ones: the men fly, they get drunk, they use the local brothel, they swear, they die and they attend the funerals of their dead colleagues. And they have nightmares.

If that all sounds rather boring, believe me it is not. There is much action in the air, the dialogue is sharp throughout and there are constant reminders of just how horrific war really is.

Second health warning: if you dislike bad language, then this book will not be for you. This is also constant throughout. But we can forgive these young men; every day may be their last. However, sex scenes and graphic violence, though very much part of the action, are not told in great description.

Having said all that, this book differs from the others. The war in the air intensifies and Franz is badly wounded. Suddenly the war ends and he has to face the future, his family and his past. We clearly see how the mental effects of the war have changed him and, in all honesty, it makes us wonder how these young men managed to survive and what they had to cope with once peace was declared. Peace from the reality of war, but not the mental fallout.

This volume, perhaps, is not a stand-alone; I would recommend starting at the beginning, but I have had the pleasure of reviewing all five volumes of this saga and I have been impressed throughout by the way the writer has held the reader's attention. Bravo.