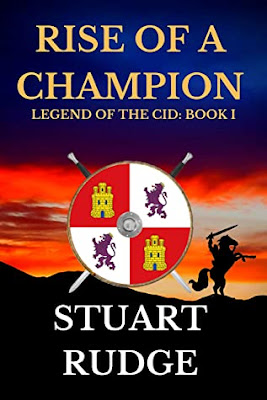 
In a medieval castle in Asturias, the young Antonio Perez is doing his daily work-out, bashing a post with a practise sword. He is fifteen, the younger son of Pedro Valdez, a famous knight and war-hero. Problem is, Antonio doesn’t want to be a knight, he dreams of being a priest—well, except when his heart sort of leaps at the sight of the fair Jimena, daughter to the count of Oviedo.

What Antonio may or may not want out of life becomes irrelevant when his father and uncle are framed for treason. Suddenly, there is no home, no family, no wealth. Instead, there is only a terrified boy fleeing the destruction of everything he once took for granted. With Antonio are his older brother Inigo and a cousin. Together, the three boys swear revenge and decide to make their way towards Palencia, there to kill the man they hold responsible for their fathers’ brutal deaths.

Obviously, things are not that straightforward, and soon enough Antonio finds himself entirely alone in the world and accused of having murdered pilgrims on the Camino de Santiago. As his punishment, he is made a slave and turned over to Rodrigo Díaz de Vivar, the man history mostly knows as El Cid.

Mr Rudge has obviously expended a lot of time on research. He presents a divided Christianity fighting an equally divided collection of Moorish kingdoms. The powerful king Fernando is growing old and has already decided he will divide his realm of Castile-Leon among his two eldest sons, and the young princes, Sancho and Alfonso, do not exactly drip with brotherly love. It is a time of upheaval, of a heady blend of cultures. It is also a time where a man of courage and fighting skills can carve a place for himself—which is what Antonio does.

In many ways, Rise of a Champion reads like a coming of age story. The Antonio we first meet as a boy of fifteen has transformed into a young man of eighteen by the end of the story.

Rise of a Champion could have done with a more thorough edit. I, personally, would also have liked a Historical Note, a clarification of which characters are fictional and which are not. At times, the prose is rushed, sometimes a character pops up by name without an introduction, but this is forgiven by the sheer passion Mr Rudge pours into his story. It is evident he loves his period, his characters, and when I turn the final pages of Rise of a Champion I find myself fully invested in Antonio, more than curious to know what happens next.