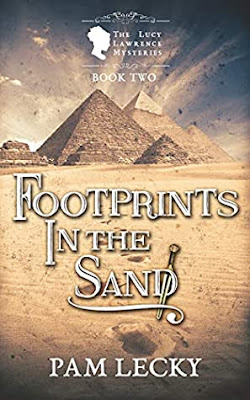 mystery
1800s
Egypt
Book 2 of a series
"Cairo 1887: A melting pot of jealousy, lust and revenge. Who will pay the ultimate price? Lucy Lawrence throws caution to the wind and embarks on a journey of self-discovery to the land of the pharaohs. Travelling to Cairo as the patron of the charming French Egyptologist, Armand Moreau, Lucy discovers an archaeological community plagued by professional rivalries and intrigue. It is soon apparent that the thriving black market in antiquities threatens Egypt’s precious heritage. When the Egyptian Museum is burgled, Lucy is determined to solve the case, much to the annoyance of the local inspector of police, and the alarm of Mary, her maid. But when an archaeologist is found murdered in the Great Pyramid, Lucy is catapulted into the resulting maelstrom. Can she keep her wits about her to avoid meeting a similar fate?"
Lucy Lawrence has the very best of intentions, but she does like to meddle where she should not be meddling. She heads for Egypt and the Great Pyramids with Armand Moreau, a Frenchman who is an Egyptologist. There, she becomes involved with a community of archaeologists who seem to thrive on intrigue, jealousy and rivalry. All seems well until there is a burglary which Lucy is determined to sort out despite objections by her maid, Mary, who is long-suffering of her mistress’s inclinations to get embroiled into dangerous situations, but as a servant has no say in where they go, who with, or why. Nor has she any hope of leaving somewhere she does not like. Servants in the 1800s had no choice about these things. I loved her grumbling though!
The wonderfully depicted Police Inspector would rather Miss Lawrence could keep her inquisitive nose out of things. But then there is also a murder to solve...
Miss Lecky has created an interesting character, alongside an interesting supporting cast. Footprints In The Sand is an entertaining read, bound up in a splendid attention to period detail. I would suggest to read the first in the series before this one, though, as there is very little backstory, which could be confusing to someone coming straight in to this title.
Reviewed for Discovering Diamonds