The Norse Queen by Johanna Wittenberg 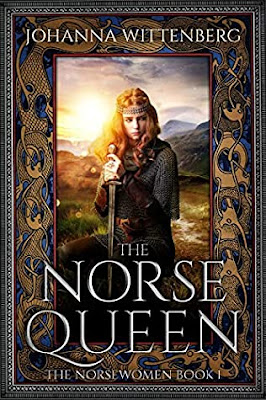 "Ninth century Norway, the dawn of the Viking era, -- a land shattered into thirty warring kingdoms. A woman could seize power, if she was bold enough. Daughter of a Norse king, fifteen-year-old Åsa dreams of becoming a shield-maiden. When she spurns a powerful warlord, he rains hellfire on her family, slaughtering her father and brother and taking her captive. To protect her people, Åsa must wed her father's killer. To take vengeance, she must become his queen."


This is a Scandinavian saga. Well-written, with a significant number of strange, ancient Norse words, handled with such dexterity by the author that they are easily assimilated and barely affect the flow of the story.

What I liked most about the book was its pace – firm and steady, never deviating from the central theme. Asa, the daughter of the king of Tromoy, is invited to marry Gudrod, the king of a neighbouring settlement. Her refusal sets off a series of events that changes her life and the lives of everyone in Tromoy. Life in ninth century Norway was tough.

The various settlements carried out frequent murderous raids on each other to seize goods and capture wives and slaves. Their daily lives were heavily influenced by Odin, Freya, and the rest of the ancient Scandinavian gods, the sorceress, or Völva, having the final say in everything they did. Animals were sacrificed to appease the gods in times of stress or conflict. And faced with overwhelming odds in battle, they even resorted to human sacrifice.

The book is historical fiction, but its pages are a solid primer in Norse history of the period.

Highly recommended. There’s a sequel, too, that I hope to read.

30th October
Book and Cover
of the month
announced