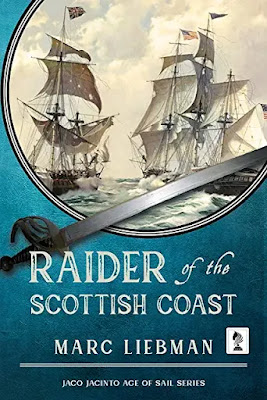 "Which serves a Navy better? Tradition and hierarchy, or innovation and merit? Two teenagers – Jaco Jacinto from Charleston, South Carolina and Darren Smythe from Gosport, England – become midshipmen in their respective navies. Jacinto wants to help his countrymen win their freedom. Smythe has wanted to be a naval officer since he was a boy. From blockaded harbours and the cold northern waters off Nova Scotia and Scotland, to the islands of the Bahamas and Nassau, they serve with great leaders and bad ones through battles, politics and the school of naval hard knocks. Jacinto and Smythe are mortal enemies, but when they meet they become friends, even though they know they will be called again to battle one another."

The use of two different characters from two different parts of the world, fighting in two very different navies is a pleasant change from the more usual Napoleonic Wars British Navy viewpoint. Marc Liebman brings the Age Of Sail superbly to life, with a believable cast of characters, and action-packed plot and well-researched detail.

We have characters to cheer for, characters to boo at, action-packed fight scenes and all rolled into life aboard a sailing ship of the 1700s.

I also enjoyed reading about the start of the America's Continental Navy  from its small, muddled beginnings.

A promising start to what looks like a promising, cracking good series of nautical adventures.