At The Stroke Of Nine O'Clock by Jane Davis 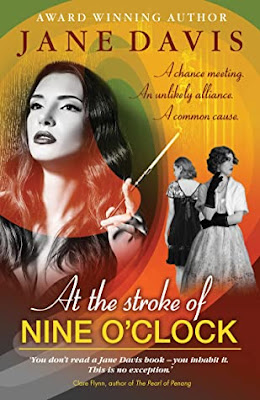 
Fictional Drama
1949-55
London
"Like most working-class daughters, Caroline Wilby is expected to help support her family. Alone in a strange city, she must grab any opportunity that comes her way. Even if that means putting herself in danger. Star of the silver screen, Ursula Delancy, has just been abandoned by the man she left her husband for. Already hounded by the press, it won’t be long before she’s making headlines for all the wrong reasons. Patrice Hawtree was once the most photographed debutante of her generation. Now childless and trapped in a loveless marriage, her plans to secure the future of her ancient family home are about to be jeopardised by her husband's gambling addiction. Each believes she has already lost in life, not knowing how far she still has to fall. Six years later, one cause will reunite them: when a young woman commits a crime of passion and is condemned to hang, remaining silent isn’t an option."
There are, oddly, three protagonists in this book, three disparate women with different background and lifestyles. Each is facing a crisis in her life. All three are distinct characters with their own voices.
Caroline is a naïve seventeen-year-old, fresh off the bus from Sussex and alone in London. With the death of her father, her mother is counting on her to make a living and send money home. She manages to get a job as a hostess in a gentlemen’s club, which entails persuading the members to buy food and drinks – lots of drinks. Anything beyond that is entirely up to her, but the owner wants a cut.
Ursula is a popular movie star returned to London after a time in Hollywood. She has left her husband and is pregnant and about to marry the father, a Hollywood director, when she learns he has spent the night with his ex-wife who delights in telling her that she too is pregnant. Alone and pursued by a gossip-hungry press, Ursula struggles to form a relationship with the daughter, ten years old, whom she left behind in order to pursue her career.
Patrice is a socialite, married to a duke who is both difficult and a drunk. It is a marriage of money and title. The duke is also a gambler and makes fraudulent use of Patrice’s signature, putting at risk her beloved ancestral home and her entire future.
By accident the three come together at the club where Caroline works and form a compassionate friendship. As they struggle with their own crises, they become involved in the real life story of Ruth Ellis, who is sentenced to death for the slaying of a brutal boyfriend. There are contemporary issues here relating to the death penalty, women’s rights, spousal abuse, and a harassing press, and we can see that the answer to the problems these characters encountered are still eluding us today.
The author is really good at creating and developing characters. With their individual personalities, even the lesser characters refuse to sit in the background. From Caroline in the smoky gentleman’s club, to the glamorous actress, to the wealthy duchess, and the people they interact with, we see life in the post-war years on many levels. I thoroughly enjoyed this well-told story of the struggles of women to survive, to surmount the obstacles placed in their path, of endurance, and of friendship between women who on the face of it have nothing in common, but who come together to help each other and to try to save another who none of them know.
Excellent read. Highly recommended.
I realise it is a cliché but I’m going to write it anyway. I think this book would make a good movie.
Reviewed for Discovering Diamonds