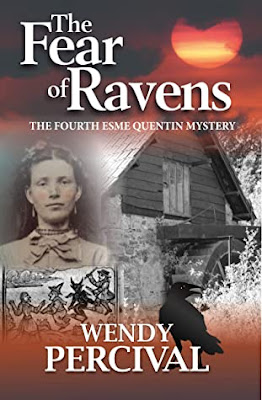 Amazon UK
Amazon US
Amazon CA
Amazon AU
Goodreads
(Esme Quentin Mystery Book 4)
cosy mystery
19th / 21st century
England
"When Esme Quentin is engaged to research the history of an ancient mill owned by her client, Anna Brannock, she stumbles upon a bitter family feud, tales of witchcraft and a century-old allegation of murder.
As Esme digs deeper, the past begins to converge on the present, when Anna becomes the target of a disturbing campaign, echoing menacing events from many years before. Can a 19th century curse still wield its formidable power? What connects Anna with the 24 year-old mystery concerning the whereabouts of the charismatic Ellen Tucker? Esme must uncover the truth to save Anna from becoming a 21st century victim, in a cruel repetition of her ancestor’s merciless fate."
This book fits into the Cosy Mystery slot with its numerous mentions of witches and murder but without the gory detail that usually accompanies the more full-blooded crime thriller.
There are many strands to the story. Instead of one heroine we have three: Anna, Esme and Maddy, each with their own personal story. There’s also an old cottage where a witch, who mysteriously disappeared, was once reputed to have lived. When Anna decides to renovate the decrepit old mill, she opens the door on a great deal of unsavoury history of two families who carry old hatreds into the current century.
There are many family members and I must confess I had trouble remembering the relationships between them. Not that all were known; some were secret relationships. Esme is curious when a private investigator seeking the owner of the cottage dies by drowning and, using her genealogical knowledge, starts tracking people down and thereby uncovering their secrets.
The book has a bit of a slow start, but the second half moved faster, and I read through to the end very quickly. The whole is well written, the dialogue is natural and entertaining though often does not progress the story.
If you like your mysteries with engaging snippets of characters’ lives and hobbies, and/or especially enjoy research into genealogy, you will love this author. Though I prefer a sharper style this did not prevent me from enjoying the story as it unfolded. The genealogical aspect was interesting, but I fear not every search is going to prove so productive - but then, this is fiction, and a 'cosy mystery' where everything gets solved in the end!
Reviewed for Discovering Diamonds