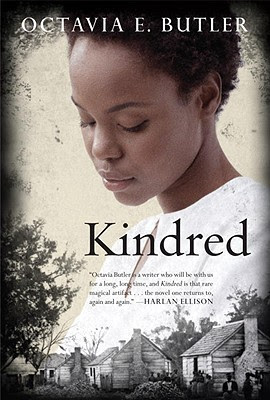 
I recently decided to reread Kindred by Octavia Butler. I had read it many years ago but forgot everything about it, so when it was selected as the next read for one of my book clubs, it was like reading this novel for the first time. Reading it was an interesting experience because, even though the book is more than forty years old, it remains relevant to our contemporary society. I am not sure if that is a sad comment or not, though I think it is. Either way, I maintain that genres like sci-fi or timeslip, as Kindred is, are excellent ways to discuss social issues and Butler’s novel is yet another example of that.

In Kindred, Dana is a modern (the novel is initially set in 1976) young black woman, married to a white man, Kevin, and they are both writers.

They have recently purchased their first real home together and are in the middle of unpacking when Dana feels dizzy and falls to the ground. When the dizziness passes, she finds herself outside and hears a child yelling for help. Since Dana is a good and moral person, she rushes to help and ends up saving a young boy named Rufus from drowning. The boy’s father comes across them and, thinking Dana is trying to harm his son, aims a rifle at her. Dana is then transported back to her home, soaking wet and covered in mud from her rescue efforts.

Over the next few weeks, Dana finds herself inexplicably called back to what she learns is 1819 in the antebellum South, to a plantation with slaves. Somehow, anytime Rufus is in mortal danger, he pulls her back in time to him, completely unintentionally. Dana learns that Rufus is one of her ancestors and she has to keep saving him until he is able to father the child who is her direct ancestor. Each time Dana goes back, she stays longer and the period spent in the past is more dangerous for her. She eventually figures out that when she herself fears for her life, she is able to return to her own time, which is moving more slowly than the past.

Dana spends hours, days, and months in the past and yet her own time period only moves forward by a few minutes or days regardless of how long she was in the past. She has to learn how to survive in a harsh time period, retain Rufus’s trust enough that he doesn’t harm her just because he can, and keep her husband Kevin safe during her travels as well.

This story was a difficult and yet un-put-downable read. Difficult because of the subject matter but a very fast and engaging read. Even though it was written in 1979, there was not much reference to technology so it didn’t feel dated. In fact, it could have been written this year and would have been hailed as a timely discussion on race relations and equality, given the ongoing protests in the US surrounding police brutality towards black people.

It was a horrifying read as well because it explores topics such as slavery, which is to be expected from the book’s premise. What was worse, though, was Dana’s thoughts on how easy it can be to become accustomed to injustice. The discussion of racism was deep and explored some of the ways in which it has become institutionalized in America even today.

Some scenes reminded me of part of Angie Thomas’s novel The Hate U Give where Starr and her brothers received “the talk” from their parents. Not the sex talk, but the talk about what to do and how to act if and when they are stopped by a police officer. The fact that such talks are considered a necessary part of parenting for so many people is heartbreaking, and Butler’s novel shows readers partly why that has come to be.

Dana adapted fairly quickly to her new environment, not because she was somehow weak or didn’t resist hard enough, but because she had to - or die. Part of the discussion on how quickly Dana had to adapt to slavery conditions was also the sense of mutual obligation between many of the characters. They all tried to look out for each other and take everyone’s well being into consideration, even if it was sometimes to their own detriment.

But parents, for example, would do whatever was necessary to spare their children and to keep them with them rather than being sold to different places far away. I can understand that; there is nothing I wouldn’t do to keep my daughter safe with me. Despite Dana’s ability to adapt quickly to her new circumstances, she was not spared from being on the receiving end of some awful abuse, and she lived in constant fear of being sold to a plantation further south that was notorious for its truly brutal conditions.

Part of the discussion on adapting is, I think, the ways Dana and the other black characters view Tom Weylin and Rufus. Tom initially appears to be brutal, every bit the stereotypical slave owner. As the novel progresses, how he is viewed doesn’t change into liking him so much as to seeing how he is more or less a fair man operating within the social constructs of his time period. He is a hard man and sometimes does cruel things, but he is doing what is allowed for him to do and doesn’t step out of those bounds, as disgusting as they are to our modern sensibilities.

Similarly, with Rufus, he seems to grow up to take after his father in most ways, except that he is in love with Alice, and his father never would have loved a slave.

Dana is able to forgive Rufus for so many wrongs, but in many ways, he is a pitiable character, largely lacking in understanding, empathy, or willpower.

Normally, I don’t care much for first-person perspective in novels. But I think first-person is the only way this novel could be as powerful as it was. The title itself is a stark reminder that being related to a person doesn’t always mean they are your family. There’s a big difference between relatives and family. Rufus and Dana have a sense of mutual obligation to each other, but they are in no way family as I would define it. Similarly, her marriage to Kevin is illegal in the past and, I would imagine, is seen as at least odd in 1976. I don’t think interracial marriages were very well tolerated at the time in the USA.
This was a terrific read, if difficult at times because of the things that happened to people. I definitely recommend Kindred to any fans of timeslip, sci-fi, magical realism, or antebellum history.