A Discovering Diamonds Review of Yvonne, Lady of Cassio by Rosemary Morris 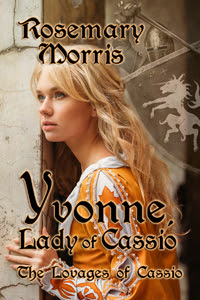 "When Yvonne and Elizabeth, daughters of ruthless Simon Lovage, Earl of Cassio, are born under the same star to different mothers, no one could have foretold their lives would be irrevocably entangled. Against the background of Edward II’s turbulent reign in the thirteenth century, Yvonne, Lady of Cassio, contains imaginary and historical characters. It is said the past is a foreign country in which things were done differently. Nevertheless, although that is true of attitudes, such as those towards women and children, our ancestors were also prompted by ambition, anger, greed, jealousy, humanity, duty, loyalty, unselfishness and love. From early childhood, despite those who love her and want to protect her, Yvonne is forced to face difficult economic, personal and political circumstances, during a long, often bitter struggle."

The Conquest of England by William of Normandy was several generations in the past, yet still conflict and mistrust is rife between the Normans and the Saxons, particularly between the old owners of the Cassio Estate, and the new... the result is a cracking good novel about relationships, two half-sisters Yvonne and Elizabeth, and the vast difference between the classes, those who rule - and those who don't.

I know little of this particular period, so cannot comment on the accuracy of the research undertaken, but the detail included certainly appears to be well done. Ms Morris adequately reflects the trauma, danger, insecurities and intrigues of the era - a harsh, often cruel and violent time, when women, in particular, had no rights and the preoccupation of noblemen was to have sons and secure good alliances through marriage, either for themselves or for their daughters.

A good historical romance, and an entertaining read.