A Discovering Diamonds Review of Untrue Till Death by Graham Brack 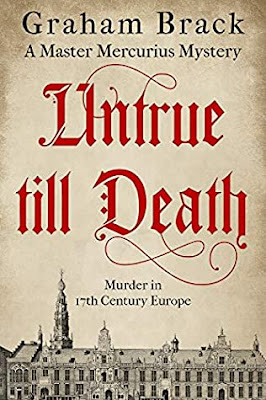 
"1674, Leiden, The Netherlands. After successfully solving the case of the missing girls in Delft, Master Mercurius has made a name for himself as a private investigator. With unrest occurring both nationally and internationally, William of Orange is obsessed by plots against his leadership. He calls on Mercurius to help to spy on state officials. But before Mercurius has a chance to investigate, his colleague at the University of Leiden is killed. And when one of William’s men is also murdered, Mercurius suspects there could be a serial killer on the loose… Are the two deaths connected? Is there a plot against the Dutch ruler? And can Mercurius successfully solve another murder case…?"

I enjoyed this! Entertaining, witty, well-researched, and a delightful main character in Master Mercurius.

What makes our Dutch sleuth so endearing is that he is fallible - he doesn't get everything right, but manages to muddle through until he can make a satisfactory conclusion. Although, meanwhile, he is torn between the need to get up at unearthly hours or the comfort of his bed, and the direction that his double-life as a secret Catholic and the open one of a Protestant - with all the conflicts these raise for his needs and emotions.

Nor are the supporting characters stereotypical of this type of murder mystery novel. Add to that, the interest of the stories being set in the Netherlands, we have the result of an engrossing read that is entertaining, informative and a little different to many another in this genre. Although this one is quite easily a stand-alone in the series, I would suggest reading Book One  (Death In Delft)  first because they are so good!

I have travelled to the Netherlands several times and know The Hague and Utrecht well, so this was another aspect of why I enjoyed this tale: the description of the cities and travel by barge along the network of canals were particularly absorbing. I especially liked the way that the author wove the historical facts into the story - the storm and its consequences is one of those things that could easily be thought of as far-fetched writer's imagination added in for a convenient plot device, until you realise it did actually happen!

My only very slight niggle was that Mercurius's religious dilemma was perhaps mentioned too often. Once I knew he was secretly a Catholic priest I really didn't need the too-often reminders.

I did guess 'who-did-it' quite early on, but so what? Good plot, good characters, a good read ... and one of those excellent novels that has you looking up Wikipedia to find out more about the facts behind the fiction.