A Discovering Diamonds Review of A Sparrow Alone by Mim Eichmann 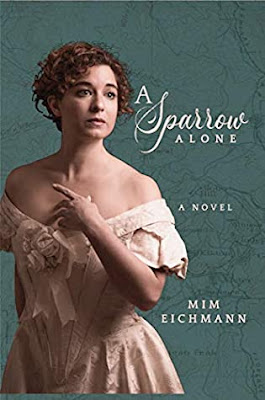 "1890s. Colorado. Following her mother's sudden death, thirteen-year-old Hannah Owens is hired as domestic help by a wealthy doctor's family in Colorado Springs. When the doctor declares bankruptcy and abandons his family to finance his mistress Pearl DeVere's brothel, Hannah is thrown into a world of gold mining bonanzas and busts, rampant prostitution and the economic, political and cultural upheavals of the era. Two of Cripple Creek's most colorful historic characters, Winfield Scott Stratton, eccentric owner of the richest gold mine in Cripple Creek, and Pearl DeVere, the beautiful madam of The Old Homestead come to life as this old-fashioned, coming-of-age saga unfolds, a tribute to the women who set the stage for women's rights."

A Sparrow Alone by Mim Eichmann is the story of Hannah Owens, a child who, at the age of thirteen, is forced to become an adult after the death of her mother. Hannah's father makes the decision to keep his son and move his two daughters out of his home since, in his mind, they would not contribute substantively to his survival. Hannah is sent to live in servitude with Dr. Albert Hughes and Mrs. Margaret Hughes. This is where Hannah makes her rite of passage into the adult world of 1890s Colorado.

Eichmann has done an excellent job using historical records and the inclusion of two actual people from Cripple Creek, Colorado, and the surrounding towns to move Hannah’s story forward. The first historical person, Pearl DeVere, is introduced early in the story as a dressmaker from Colorado Springs. Hannah soon comes to realize that Mrs. DeVere and Dr. Hughes are romantically involved. Dr. Hughes eventually leaves his wife to support Mrs. DeVere and her new business, The Old Homestead House - the most famous brothel in Cripple Creek. Hughes leaving his wife sets the stage for future events that will shape the woman that Hannah becomes. Another key historical character is Winfred Scott Stratton, the eccentric millionaire and owner of the Independence mine. Eichmann positions Stratton as another key person who becomes a strong influence in Hannah’s life.

Eichmann weaves different narratives into Hannah’s story that are relatable, especially if readers are familiar with the struggles of the mining communities during the nineteenth century. As I read the story, the experiences faced by Hannah and other characters reminded me of the stories my dad, who was born in the Cripple Creek area in 1902, would share. Eichmann skillfully accomplishes capturing the essence of the culture in Colorado and the mining communities.

Hannah’s life as a young teen, considered a woman, is challenging. The trials and tribulations she has to overcome are relentless. To present readers with a whole picture of Hannah’s suffering, Eichmann introduces a rotating list of characters to develop the multiple events Hannah experiences throughout the novel. Due to this, it is easy for the reader to glaze over what seem to be minor storylines: skimming these can lead to  missing surprising truths about Hannah’s life that are eventually revealed toward the end of the novel - so I would advise, no skimming.

Life for young girls at the end of the nineteenth century was hard because of the expectations placed on them by society and the communities of which they were a part. In Hannah’s case, she discovers at a very young age that she must care for herself by whatever means she can to survive. Although she is repeatedly abused and taken advantage of, she continues to move forward despite what is placed in her path that tests her strength and taxes her endurance.