A Discovering Diamonds Review of The Cold Hearth by Garth Pettersen 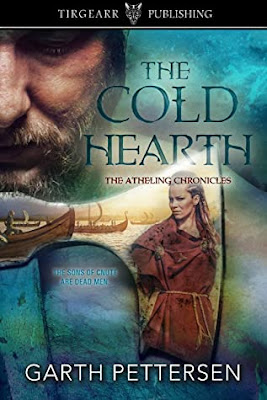 Two incidents at the beginning move this story forward. The first is the prologue which relates the murder of an entire family and household members by a neighbour. The second is the attempted murder of Swein, son of King Cnute (author’s spelling) who is warned that all the sons of King Cnute are dead men. Cnute has three sons (Athelings). Swein, the eldest, and Harald Harefoot are the sons of his first wife. Harthacnute, although the youngest, is his father’s heir.

Harald is the protagonist of the story. He has retired to a ruined estate which happens to be where the family was murdered. When Harald learns about the attempted assassination of his brother, he becomes wary of those about him. The neighbour, son of the man responsible for the earlier killings, appears friendly, but is he? The two housecarls Harald has hired for protection – are they to be trusted? And what about the two dispossessed sons of the previous king, Ethelred? Even Harthacnute comes under suspicion until an attempt is made on his life.

There are some periods of low drama when we read how Harald revives the estate his father has given him. The action picks up after he is attacked by hirelings. An element of suspense could have been added by the question: who did the hiring, but we already learned this early in the book.

Set against the machinations of kings and princes, is Harald’s attempt to live in peace and build a life for himself and his wife, and a neighbour dealing with the guilt of a crime he didn’t commit.

Harald is not the stereotypical Viking alfa-male. He loves his wife and frequently defers to her.

There have been two previous books in The Atheling Chronicles but this one reads well as a stand-alone. Although the story comes to a satisfactory conclusion, the way is set for another in the series.

Lovers of the period will enjoy.