A Discovering Diamonds Review of The Sewing Place by Joslin Day 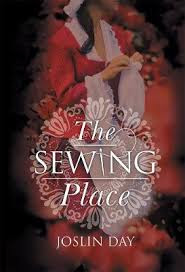 Written in a style reminiscent of a Victorian novel, The Sewing Place is a book to settle down with for a good long read. Author Joslin Day develops her characters so effectively they almost become real people. The setting, eighteenth-century Exeter in Devon, England, is described warts and all, and the author obviously knows the surrounding area extremely well. Description is evocative and in places, lyrical.

The main female character, Rachael (or Rae), is an innocent orphan coming into womanhood with literally no place to call her own, not even the window seat where she sits to sew. She is the servant of an absent local artist and friend of working girls in the neighbouring brothel, but she is also literate with strong personal moral values. None of which helps her when she is raped during the night by an unknown male.

The male protagonist, Henri Latimer, is a hard-working, honest merchant struggling to keep his business going and raise two motherless children. Henri has a generous disposition and apart from being courteous and kind to Rae endeavours to help his nephew Geoffrey. Regrettably, the lazy, ungrateful Geoffrey does nothing but cause those around him strife. When Rachel realises she is pregnant Henri Latimer comes to her aid – to say more would be a spoiler, but their relationship is tested to the limits by social convention and the presence of typhus in the city.

I enjoyed this novel, particularly for its attention to period detail and descriptions of Exeter streets and Devon landscapes, but I have to say my enjoyment was hampered by confusion with various characters’ names. The author uses both first and last names somewhat randomly in both narrative and dialogue so it might have been worthwhile to establish a ‘who’s who’ at the beginning (although character lists are never easy to use in e-book format). Rae or Rachel, a very humble servant, speaks to a well-to-do merchant by both his first and last name in dialogue, while narrative sections include both the first and last names of secondary characters and servants, whom I’m sure would have been addressed only by surname. Attention to this, by the author or by an editor, would have made a good novel into a very good novel.

That issue aside, The Sewing Place is a most pleasant read for anyone who likes historical fiction to be historically accurate and/or enjoys a family saga. Joslin Day has an excellent understanding of human strengths, weaknesses and foibles; of how some people strive to do better and some are just plain mean or incorrigible. This is her first published novel I hope there will be others. A Latimer saga, perhaps?