How Dare the Birds Sing by Marina Osipova 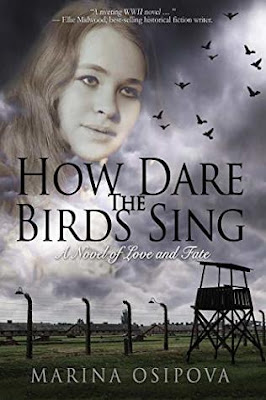 
Fifteen years after World War I and just as Hitler was coming to power, Lyuba and Natasha are walking in a park and meet two men who are enrolled at the flying school. Gunter is German and Germans are still disliked and mistrusted in Russia. Lyuba falls in love with him, although she feels a strong attraction toward his friend, Stepan.

One day Gunter is gone. Lyuba assumes he has been called back to Germany but he left with no explanation and she feels betrayed. With Gunter out of the way, Stepan drugs Lyuba, forces sex on her, and then compels her to marry him to protect her and her mother from the secret police. She spends years longing for Gunter, at the same time as trying to reconcile herself to a life with Stepan whom she now loathes. When World War II breaks out and the Germans invade, she has to face dangers and difficulties far worse than marriage to an unpleasant man.

Stepan has some redeeming features. He truly loves Lyuba and, other than expecting her compliance in bed, doesn’t treat her badly. And when they adopt a little girl, he proves himself a good father. The author does a masterful job of turning him from an arrogant brute at the beginning of the book, to a man whose motives and actions (not all of them) we can sympathise with by the end.

At the start of the story, Lyuba is a sweet, naïve seventeen-year-old with a future in teaching ahead of her. But she has to learn other skills in order to survive. Throughout the war years, she is the victim of circumstances again and again, and the reader is carried along from one tense situation to another. None of which situations stretch credulity.

World War stories are not my favourite reading, but I enjoyed this one. Love, loss tragedy, pathos; it’s all there, with plenty of action added to the mix. I was enthralled throughout. An excellent book and the author will go on my TBR list.