A Discovering Diamonds Review of The Viscount Besieged by Elizabeth Bailey 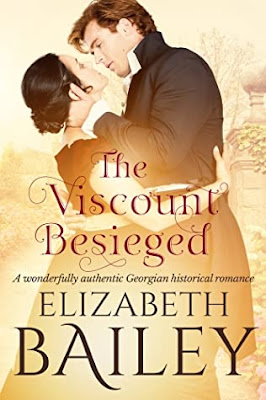 "1798, England. Isadora Alvescot has always dreamed of becoming a famous actress on the stage. But when her beloved papa suddenly dies, her family’s future is thrown into turmoil. With no immediate male heir, the family estate has been bequeathed to a distant relative – a viscount named Lord Roborough. And now Isadora is being pressured to consider matrimony. When Lord Roborough arrives, Isadora is desperate to do all she can to find out his intentions and determine whether he is a friend or a foe…Will he allow her family to remain living on the estate? Will Isadora still be free to pursue her dreams of acting? Or will she be forced to bend her will to another and become a wife?"

Twenty-year-old Isadora is a complex character, with many, quick, mood swings. I wasn't quite sure whether I liked her or not, but she was immensely entertaining as a character, so perhaps, yes, I enjoyed her!

Her counterpart, Lord Roborough is also a delightful character, enigmatic, mysterious  - will they, won't they fall for each other, and if they do not, why not? Will 'Dora reach her dream of becoming an actress? Or will that feisty temper of hers lead her into trouble once too often?

The story was a little on the slow side to get going, and I did feel was dialogue-driven rather than character led, but, once things picked up and the characters began to develop the story took off with a few twists and turns and some witty, clever, banter along the way.

Readers of Romance will enjoy this charming Regency Romp;  it will not disappoint.