A Discovering Diamonds Review of The Silken Rose by Carol McGrath 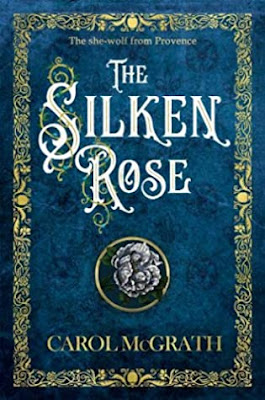 This novel, the first of a planned trilogy, focuses on Eleanor of Provence, the wife of Henry III, beginning with her journey to England to marry a man who was more than 15 years her senior. In this book, she is called Ailenor. The narrative brings readers along as Ailenor learns first how to be a wife and queen and then a mother. It gives us  varying perspectives, from Ailenor to Eleanor (sister of Henry III, wife of Simon de Montfort) and a fictional embroideress, Rosalind, and covering a variety of the events that plagued Henry III’s reign. The trilogy plans to take a look at the women who have been termed “She-Wolves” for various reasons. This first installment takes care of Eleanor of Provence and her reign as Queen Consort.

First, the good. There were many, many enjoyable things about this book. I loved how much detail there was. In every scene, McGrath evoked imagery, scents, sounds of daily life in medieval London. I especially loved the details with herb and flower gardens. I could practically smell the lavender and rosemary as I read. Similarly, the descriptions of the street scenes in London were just as evocative.

I appreciated other small details, such as the use of relics, in particular the Virgin’s girdle, as charms for a safe childbirth experience. The churching ceremony after giving birth was not given a lot of detail, but it was mentioned a few times throughout the novel and it added extra depth. Also, a queen’s role as intercessor was mentioned several times. I’m fascinated by the queens’ intercessory role throughout time and how it changed, helped, or hindered politics. Little things like this make readers like me happy. I know not everyone cares about historical accuracy when they read a book for pleasure (*horror!*), but I am always deeply appreciative of authors who are as accurate as they can be. The readers like me will be happy and the readers who don’t care will still read the book and enjoy it regardless.

A few quibbles, however. The writing was clear and easy, flowing smoothly from one perspective to another. The main POV character was, of course, Ailenor, but Rosalind and Nell also got a good deal of time. I was glad, though, that the chapter headings indicated when a change of perspective happened because I didn’t find there was much variance in the voices portrayed by the three women. Ailenor, Nell, and Rosalind often sounded similar and could be hard to tell apart if it were not for chapter headings, so there was little individual character distinction.

By the same token, I felt that Rosalind was the only one who really had any character development. Ailenor, by contrast, sounded like a fully mature woman even on her journey to meet her husband-to-be when she was only 12 years old. Rosalind, on the other hand, started as a young and shy embroideress but grew into a confident and respected woman, wife, and mother. I did wish a little more of her story had been given to us. She was probably my favorite character in the book. The narrative felt incomplete because there were some fairly substantial jumps in the events of her life. However, since she was not the primary focus of the novel, this is probably why the author decided not to make her a larger figure.

The novel ended with the promised betrothal of Edward to Eleanor of Castile in roughly 1254. This was about ten years before the start of the Second Barons’ War. I was disappointed that the novel didn’t cover this since I think a lot of interesting content could have been written about Ailenor during those years. She was considered one of the She-Wolves, and the Barons’ War and Simon de Montfort’s role was a major element within Henry’s reign. Perhaps these details are to be included in the next book of the series?

It would have been particularly interesting to see Rosalind’s role in these events as well. Even though she is fictional, sometimes those are the best characters through which to explore an historical event or person. Again, I understand why it wasn’t included, though.

Overall, I enjoyed this novel. It was an easy read and gave an interesting glimpse into a fascinating period of England’s history.

N.B: the file received to review was a PDF copy, and therefore unedited with several errors re: muddled sentence construction, typographical mistakes etc. Discovering Diamonds has been informed that these have been rectified.