A Discovering Diamonds Review of Interviewing the Dead by David Field 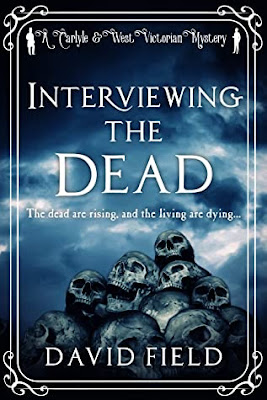 
"London, 1892. Over two hundred years ago, in 1665, a mass grave was dug to house the hundreds of corpses who fell victim to the Black Death. When Aldgate Underground station was extended, the workmen discovered the grave and unceremoniously dumped the bones, to make way for the new track. Now, a renowned spiritualist is claiming the dead are rising to punish Londoners. Strange encounters start to be reported in London’s East End with some people dying from unexplained causes. People start to panic, and distressed parishioners consult local preacher, Matthew West, looking for reassurance. Matthew is at a loss and turns to local doctor, James Carlyle, for answers. Carlyle and West have very different views on science and religion, but they decide to work together to get the bottom of the mysterious deaths. Has a curse really been put on London? Have the dead risen from their graves? Or could a serial killer be loose in the city…?"

When medium Sarah Gibbons has something of a fit before a full house, screaming that she can see the ghosts of the long-dead plague victims whose final resting place has been disturbed by the expansion of the Metropolitan Line, she sets off a sequence of events. Suddenly, the residents around Aldgate, the poor souls who live out a harsh life in the backyard of 19th century London, have a new threat to contend with: vindictive ghouls.

The fact that multiple witnesses come forth claiming to have seen said ghouls—some are even scared to death by the apparitions—does not convince pragmatic doctor James Carlyle that there is something paranormal at work. Neither is the young Methodist preacher, Matthew West, inclined to believe in visitations from the past, but something is happening, the tinge of fear and evil settling like a wet blanket over the East End of London. Carlyle and West, together with Scotland Yard detective, Jennings, form an alliance to get to the bottom of all this.

There are clear echoes of Arthur Conan Doyle’s books about Sherlock Holmes in Mr Field’s novel, albeit that here it is the doctor who plays the lead role rather than being the side-kick Watson is to Holmes. It is, however, my opinion that it is Matthew West who is the real protagonist, despite Carlyle’s evident brilliance. Matthew is a likeable protagonist, thoughtful and contemplative but with plenty of fire and backbone in him when so required.

The female lead, Carlyle’s daughter Adelaide, is also well-drawn, albeit she is at times surprisingly brash and rough around the edges for a woman of her time. However, it is easy to relate to her explosive temper and rants: here we have an intelligent young person who finds herself severely constricted by her gender, reduced to being a second-class citizen in a world where women more and more are beginning to question the ancient order of the world.

The plot as such is not particularly riveting – it is relatively obvious that London is not in the throes of a paranormal invasion and the subsequent investigation is entertaining rather than exciting.  The descriptions of the darker sides of London, however, are extremely evocative, vividly bringing to life a world where poverty reeks and stinks, where everything is somehow grey and dirty—constantly. This is a world of hollow-eyed infants, of women who sell their bodies for food, for gin, of men who bow under the weight of supporting their growing families on a pittance. There is little light in this world. It is a world of shadows and grime, a world with little, if any hope. At times, Interviewing the Dead reads more like social history than a novel, and while this highlights just how thoroughly Mr Fields has researched the era, it does result in a loss of pace.

In conclusion, Interviewing the Dead is a book I would recommend to all those who love depictions of late Victorian London, who shiver delightedly at being showered with details about everyday life in an era where the world stood with one foot still rooted in the past while the other was firmly set on the path towards the beckoning future.