A Discovering Diamonds Review of The Saracen Storm by J.M. Nunez 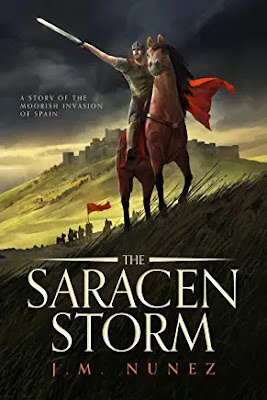 It is always a pleasure to pick up a book set in an era that is rarely represented in historical fiction. In this case, Mr Nunez leads us back to the years around 700 A.D, Spain. At the time, Spain did not exist. The former Roman colony had been invaded by the Visigoths some centuries after the birth of Christ, but now the various Visigoth kingdoms are quaking under the advance of the Saracen conquerors. It is a confused time, a time when the Christians are pushed further and further north. It is a time brought to vivid life by Mr Nunez, his obvious extensive research resulting in a multi-layered depiction of the historical landscape.

Any Spanish schoolchild will have heard of the battle of Covadonga, as pivotal an event for the future Spain as the Norman invasion in 1066 is for England. At Covadonga, the hero of the day led his Christian countrymen to victory over the advancing Moors. At Covadonga, the determined Saracen expansion was brought to a brutal halt, thereby kicking off the Spanish Reconquista—a struggle to reconquer the former Christian Spain from the Moors that would not end until 1492, when the last Moorish Kingdom, Granada, fell to Fernando and Isabel.

The hero of Covadonga is a certain Pelayo, a man shrouded in mist. Mr Nunez has made Pelayo the hero of his narrative and does an excellent job in breathing life into the myth, the man, the legend. Born the bastard son of the Duke of Asturias, Pelayo overcomes the stigma of his birth, the hatred of his half-brother, the loss of the love of his life and emerges harder and sharper, a bit like a tempered blade of steel. But the young Pelayo is something of a wastrel, more interested in enjoying a good time with wine and wenches—likely an attitude he adopts to annoy not only his father but primarily his half-brother, Julian. But then, one day, Pelayo comes face to face with the destruction wreaked by the Moors on a village of his people. A new Pelayo is born that day, a man of action and brains, of integrity and honour who will rise to the occasion despite all those who do their best to see him tumble. Mr Nunez’ Pelayo is an engaging man, a character one roots for.

At times, Mr Nunez’ erudition and love of the period results in something of an information overload. But this is easily forgiven given a narrative that so firmly takes the reader by the hand and expertly guides him or her through the complex historical landscape that is Spain of the 8th century. Warmly recommended!