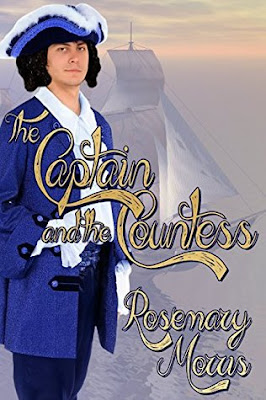 “London. 1706 Why does heart-rending pain lurk in the back of the wealthy Countess of Sinclair’s eyes? Captain Howard’s life changes forever from the moment he meets Kate, the intriguing Countess and resolves to banish her pain. Although the air sizzles when widowed Kate, victim of an abusive marriage meets Edward Howard, a captain in Queen Anne’s navy, she has no intention of ever marrying again. However, when Kate becomes better acquainted with the Captain she realises he is the only man who understands her grief and can help her to untangle her past, and help her regain that which should be hers by right.”

Queen Anne’s Navy, a dashing young Captain and a widow, somewhat older... Ms Morris has captured the period well, both in the way people behaved and in the way life dictated beliefs and opinions. I also enjoyed that, although this was a ‘Regency Romance’ in style and feel, being set almost a century prior to the typical ‘Austen Georgian Age’ this was a nice change from the norm. I don’t think I have read much about the Queen Anne period, so this delving into a relatively unknown period setting was extra enjoyable.


Edward Howard, our hero,  is waiting for the Admiralty to decide his future, meanwhile he must survive on half-pay. He is  young but dashing; mature and reliable. Kate, the heroine widowed Countess, has a damaged past and her heart is full of sorrow. The love story that emerges when the two meet, although sensual, is not explicit –  the traditional ‘happy ending’ was most satisfying, although I did need to reach for the box of tissues a couple of times before I got that far!