The Bloody Road by Nigel Seed 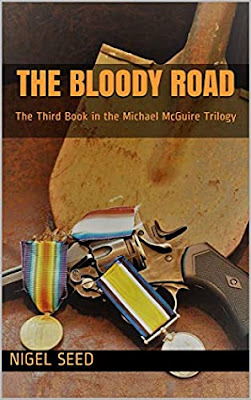 
After more than a decade as a civilian, Michael McGuire is persuaded back into the army to train Australian volunteers at the beginning of the First World War. Using his unique training methods and his ability to motivate even the worst of soldiers, he forges them into a fierce fighting unit. His reward is to be sent with them to Gallipoli where they experience the most disastrous campaign of the early part of the war. From there they are sent to the Suez Canal to repel a Turkish offensive and, following a successful conclusion, are packed off to the Western Front.

In this final part of the Michael McGuire Trilogy the sheer horrors of the Great War are told without compromise; Nigel Seed is as brutal to some of his characters as the actual war was to real people. Many of the incidents in the narrative actually happened and the author – as in the previous books in the series – introduces some interesting and high profile cameos. There is enough retelling of McGuire's back-story to make this a stand alone book, however, as ever, I recommend reading the previous two volumes not only for McGuire's previous exploits but also because they are really good!

As usual, the author has extensive and interesting Author's Notes, dispelling some myths, telling some truths and attributing some of those incidents where possible. In a way, this is a fine tribute to the brave Australian and New Zealand soldiers who were, when all is said and done, all volunteers.

In my opinion, this is the best book of the three and I will miss Michael McGuire, his intelligence and understated Irish logic.
Highly recommended.