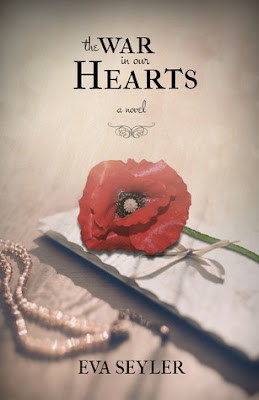 Set primarily in the trenches of WWI, The War in Our Hearts tells a story of courage and redemption, of innocence destroyed and the healing power of love. Captain Jamie Graham, stranded by a broken vehicle, takes shelter in a barn – only to find a terrified, violated young girl. She is alone, and he – gentleman and officer – cannot leave her to fend for herself.

In the hurt and bewildered Aveline, Jamie – Lord Inverlochy – sees an echo and reflection of himself. Heir to his estate by the random order of his birth minutes before his twin, from childhood he is not what his tyrannical father believes he should be. Sensitive, musical, he is beaten and abused and finally sent away to school. Music and religious faith become his bulwarks.

Intertwined with the horrors of life in the trenches – lice and mud and the incessant thunder of the guns – are interludes of Jamie’s past, charting his own difficult journey to adulthood and to love. The brief period of peace he finds between the death of his father and the beginning of the war speaks to what his life might have been.

The author parallels the larger war and the attack on Aveline effectively: Jamie’s actions may have little effect on the outcome of WWI, but her rescue gives meaning to the chaos and destruction he finds himself part of. This part of the story, Jamie’s experiences at the front, were the most compelling and strongly written, the characters dimensioned and real, whereas some of Jamie’s past story lacked, for me, the same immediacy and depth.

The solace and strength Jamie finds in music is well-portrayed, something he would have had in common with many officers and men at the front. The depiction of his troubled, doubting soul and the courage and resilience of Aveline are the centrepieces of this debut novel, and I look forward to reading more of Eva Seyler’s work.


29th June - announcing our
book and cover selections of the month