A Cherry Blossom in Winter by Ron Singerton 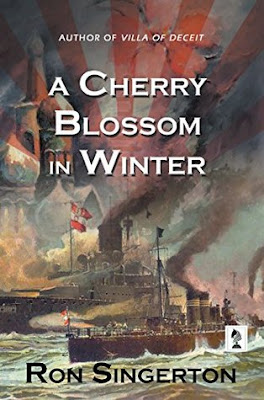 
Revolution is simmering below the surface in Russia. Workers are striking and getting shot for peaceful protests. Dissatisfaction with the Tsar’s government is building. The background of the story is the Russo-Japanese War. The scenes of sea battle paint a horrifyingly vivid picture of the carnage and horror during the engagement at Tsushima. I hope it’s not a spoiler to say that this war was a factor in the coming revolution.

Young Alexei Brusilov makes an enemy of Boris Sukolov by besting him in a fencing competition at the Naval Academy. This is the beginning of a bitter enmity on Boris’s part which only deepens with further encounters. When Alexei’s father is offered a post in Japan, Alexei reluctantly goes with him to get away from the vengeful Boris. In Japan, he meets beautiful Kimi-San. For both, it’s love at first sight, although she is promised to another man. Kimi is a woman of her time, so their relationship is very much hands-off in the beginning. It is a forbidden but tender romance, conducted for the most part through letters and at distance.

At the start of the story, Alexei is an unsophisticated seventeen-year-old. His growth is not always heroic but terribly human. We see him exiled in Siberia, sunk in despairing dissolution, and again on a ship succumbing to despair as shells explode and body parts fly around him. And we see him rise above these awful tests.

The secondary characters are all very believable and help move the sub-plots along. Olga with her secrets. Sergei who longs for revolution. Count Yevgeny who beats his wife but is dominated by his mistress. Even Boris is not entirely evil, being redeemed by his love for the wild Svetlana.

The author provides some delectable tidbits of social mores. In Russia, at least in noble circles, it was accepted that husbands take mistresses and wives take lovers. Often cuckolds were friends with their cuckolders. A high level of discretion was required, but any hint of jealousy was unacceptable. In Japan we learn something of Japanese culture, particularly as it relates to interactions between a man and a woman.

Really strong writing and so many elements to the book that I have no hesitation in recommending it. I look forward to continuing the story in the second book.