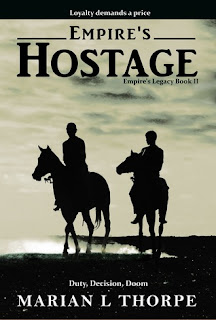 In the second book in the Empire's Legacy series, The Empire and the northern people have been at war for over a year, but a truce is finally at hand. As part of this treaty, Lena, now a Guardswoman on the Wall, is asked to stand as hostage, to go north to live and learn among the people of Linrathe. But not everyone there will welcome her.

As Lena learns more of the history of both her land and the north, a new threat emerges, one that will test her loyalty to its limits, and in the end, demand a price she could not have envisioned.

As the blurb states, this is the second book of a trilogy and, even though I've read the first (Empires' Daughter), I was pleased to find a precis of that first novel at the beginning of this one, so that anyone unfamiliar with the story so far can catch up. Lena's story continues, but it came to a satisfying pause at the end of Book One, and goes off in a new direction in Book Two. These are definitely plus points for me, for I like a series to be a group of books which can be read alone, rather than have things left on a cliffhanger.

Empire's Hostage tracks Lena as she is forced to travel north of the wall as part of the terms of the delicate truce. What follows is a story packed full of interesting characters and an adventure-driven plot which keeps you turning the 'pages', keen to find out what happens. Although this is a fantasy series, set in a fictional world, it has been constructed using a wealth of historical research. The languages used by the people of Linrathe and the Marai are based on Old Welsh, Gaelic, and Scandinavian languages. The Empire has much in common with the Roman Empire, and the whole feel of the book - modes of transport, food and drink, farming and fishing practises - is medieval in tone. As I mentioned in my review of Book One, this is a world about which the author knows every tiny detail. It is as keenly and intelligently researched and written as any good historical novel, and it reads like historical fiction, with the added bonus that this is a new world, one with which the reader becomes readily familiar because the author knows precisely what that world looks like, along with every intimate detail of her characters' lives.

I'm not normally a huge fan of books which use the first person narrative but here it really works well because Lena is a shrewd observer of people and a very thoughtful character. She learns from her experiences, questions the motives and behaviour of others, and she develops as a character, being plausibly shaped by all that has happened to her.

Once again, this part of the story cleverly has both a definite ending and a promise for future adventures. I'm very much looking forward to reading Book Three.