A Discovering Diamonds Review of Anna’s Refuge by Kerryn Reid 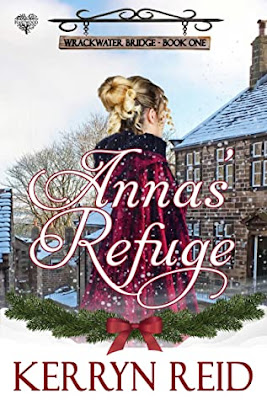 Anna Spain is so deeply in love with the dashing, charismatic Gideon Aubrey that she allows him the kind of liberties a young woman of her time usually reserves for her husband, only to find that Gideon is no gentleman. He is in fact a scoundrel who, having had his way with her, jilts her in a most humiliating fashion. However, the scoundrel’s younger brother, Lewis, while not so attractive is sympathetic, sensitive and feels bound to help her, since he blames the nefarious Gideon for the position she is in. But then he falls in love with her. This odd sort of love triangle is complicated by the inevitable baby on the way.

Anna’s heartless parents set her up in a dilapidated flat in Leeds with little money and a single servant who is devoted to her. Seduced and abandoned, Anna feels she deserves nothing better. Lewis offers help but, again, her shame is so great that she rebuffs him. Whether the ‘Refuge’ of the title refers to the flat in Leeds or to Lewis is debatable. I’m inclined to think the latter.

It is Lewis’s love for her that finally convinces Anna she is a person of worth and allows Lewis to escape the shadow of his brother. Of the two, Lewis is the more appealing character and won my applause.

This is not an action-packed drama – nor is it meant to be. But I have to say that some parts were drawn out and would have benefited from a cropping. Otherwise it was a good read, particularly for readers who like a romance novel.