A Discovering Diamonds Review of ALL THE PEOPLE by Jeff Kaye 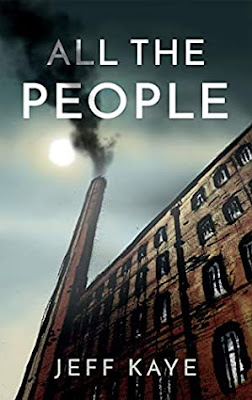 
James Hull is a farmer and a rising star in the newly formed United Brethren Church. He lives with his wife Elizabeth and their numerous children in peaceful Bedfordshire waiting for the call from the church leaders. When it comes, it will prove a testing time for all the family.

James has been chosen to be a missionary for the church – in Manchester. Elizabeth is doubtful about the upheaval and stalls the proposed change, asking God for a sign as to what they should do. Meanwhile their daughter Mary succumbs to illness and Elizabeth is now convinced that they should leave Bedfordshire, but blames herself for the child's death.

On a 'familiarity' trip to Manchester, James encounters nine-year-old Mary Burns who works in the mill owned by Hugh Hornby Birley, a powerful man who believes in the 'natural order' and will have no truck with the so-called Chartists, many of whom work for him.

The build up to James' mission and the subsequent events is perhaps a little overlong, but the incident where James meets Mary Burns was quite moving and did change my outlook: I did want to find out what happened and I did care for the people involved. After that point, the pace picks up quite considerably and culminates in a moving and emotional climax.

Thanks to the Author's Notes, I discovered that not only were the events true, but so were all the major characters. James Hull was a missionary for the United Brethren (also known as Moravians), Birley was every bit as bombastic as the author depicts him and Mary Burns became a major player in the Chartist movement.

After the slow start, I enjoyed this book and it would be ideal for anyone interested in the period or the place following the Peterloo Massacre and the conditions in which industrial workers were forced to live.