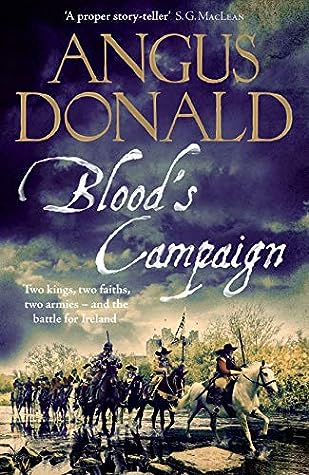 
"August 25, 1689 The English Army is besieging Carrickfergus in Ireland. Brilliant but unusual gunner Holcroft Blood of the Royal Train of Artillery is ready to unleash his cannons on the rebellious forces of deposed Catholic monarch James II. But this is more than war for Captain Blood, a lust for private vengeance burns within him. French intelligence agent Henri d'Erloncourt has come across the seas to foment rebellion against William of Orange, the newly installed Dutch ruler of England, Scotland and Ireland. But Henri's true mission is not to aid the suffering of the Irish but to serve the interests of his master, Louis le Grand. Michael 'Galloping' Hogan, brigand, boozer and despoiler of Protestant farms, strives to defend his native land - and make a little profit on the side. But when he takes the Frenchman's gold, he suspects deep in his freedom-loving heart, that he has merely swapped one foreign overlord for another.
July 1, 1690 On the banks of the River Boyne, on a fateful, scorching hot day, two armies clash in bloody battle - Protestant against Catholic - in an epic struggle for mastery of Ireland. And, when the slaughter is over and the smoke finally clears, for these three men, nothing will ever be the same again . . ."

Action adventure at its best. I read, and thoroughly enjoyed, the first in this series, somehow managed to miss out on Book Two, but picked up the thread of the delightful Captain Holcroft Blood (who is the son of Colonel Blood, the chap who stole the Crown Jewels from the Tower of London) and his companions quite easily.

Captain Blood as a character  is a joy to meet. He is a complex, multi-dimensional person full of his own quirks - today he would be placed on the Autistic Spectrum. He is a stickler for the right way to do things, and often obsessed, which means sometimes you want to shake him, and sometimes you just want to hug him.

The supporting characters of the devious Henri d’Erloncourt,  known as Narrey, a Frenchman and spy for King Louis XIV, and Michael Hogan who may just as well be an outlaw, are equally as well drawn and interesting as Blood himself. Blood is out for Narrey's blood (excuse the slight pun) and his desire for vengeance results in trouble because Holcroft is not one for respecting orders. Victory at the Battle of the Boyne is not his priority. Killing the spy is.

The author is very clever in that he portrays this infamous battle from both sides of the conflict and blends in the little details that bring his characters alive: Holcroft enjoys his job, loves the big guns he is in charge of as much as his wonderful Lorenzoni repeating rifle and his splendid uniform. The historical research is immaculate, the writing superb and the entire novel an absolute delight.

Note, however for the squeamish: this is a novel based on historical fact, and it does have vivid military scenes of skirmishes and battles which have a violent and bloody tone. Battles were not nice places to be.