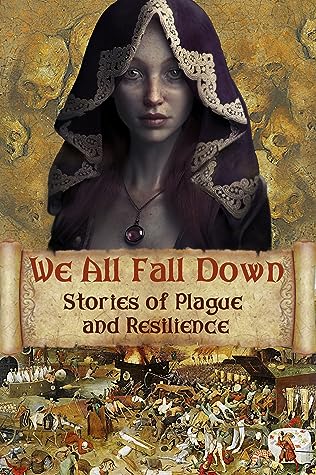 "Plague has no favorites. In this anthology, USA Today, international bestselling, and award-winning authors imagine a world where anyone—rich, poor, young, old—might be well in the morning and dead by sundown. Readers will follow in the footsteps of those who fought to rebuild shattered lives as the plague left desolation in its wake.
* An Irish woman tends her dying father while the Normans threaten her life and property—
* A Hispano-Muslim doctor fights the authorities to stem the spread of the deadly pestilence at great personal cost—
* A Tuscan street hawker and a fresco painter watch citizens perish all around them even as they paint a better future—
* A Spanish noblewoman lives at the mercy of a jealous queen after plague kills the king—
* The Black Death leaves an uncertain legacy to Dante’s son—
* In Venice, the artist Titian agonizes over a death in obscurity—
* A Scottish thief loses everything to plague and repents in the hope of preventing more losses—
* Two teenagers from 2020 time-travel to plague-stricken London and are forever changed—
* And when death rules in Ottoman-occupied Greece, a Turk decides his own fate.  Nine tales bound together by humanity’s fortitude in the face of despair: a powerful collection of stories for our own time. In dark and deadly times, love and courage shine bright."

Somewhat topical - how did the authors know? The subject - the pandemics of Plague - might not appeal to everyone given the surreal circumstances of life world-wide at the moment ... on the other hand many readers might find the topic highly fascinating. Plague (or in our present case Coronavirus Covid 19) is nothing new...

As with all anthologies, some of the included stories appeal, others not so much; it is all a matter of personal taste and preference. Some stories in a collection are memorable or leave you thinking while some, for various reasons, do not linger in the mind quite as much - but I was delighted to discover that the former of these observations is true for the majority of stories in this intelligent creation with the general theme of 'plague'.

We All Fall Down  is a collection that is perhaps particularly relevant with the current (early 2020) concern over the spread of the Corona Virus, and indeed, the alarming rise of Mumps and Measles because children have not been vaccinated. Even Polio is having a slight re-resurgence in some countries. All the stories leave you thinking 'thank goodness I live now, not then'!


I did enjoy all the stories to varying degrees, although I must admit that some were better than others and a couple left me feeling a little depressed - which, actually, is no reflection on the stories but on the skill of the writers who brought home the general feeling of hopeless tragedy that those poor people of the past had to endure when Plague struck a community, town or country. The fortitude, the despair, the hope, the tragedy all come over in every story to catch at your heart, and at the end of each either bring a sigh of relief or a surreptitious tear.


I think most of us are familiar with the Great Plague of 1665 which struck London (partly remembered well because of the Great Fire of the following year) but it was highly interesting to read about different people, in different locations, in different eras, all with the common denominator of having to deal with a similar problem or situation. And of trying to survive.

A very interesting read by a host of very good authors.