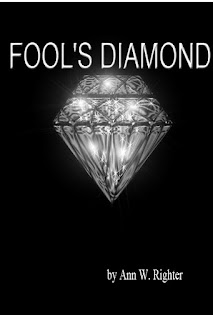 Ann W. Righter is a new novelist, she says:

I hope to self-published my first novel which is set in the 1100s and is about Shashona, a young Arab girl who disguises herself as a boy in order to escape the brutality of her cruel  merchant stepfather.

Shashona has heard stories of the beautiful Queen Elenor of Britain wife to Henry II and who wore male apparel when she went on campaign with her husband, the king. Shashona dreams of meeting her one day and when an opportunity arises she dresses in her brother's clothes and steals one of her stepfather's camels. She joins a caravan of the Silk Road heading for Morocco, hoping to cross into Spain and make her way north to this mysterious country of England where the grass is always green, rain falls from the sky and the Queen sits alone, shut in a tower waiting for someone to set her free.

It's only later that Shashona discovers a packet of diamonds amongst the silks and velvets of  the other goods loaded onto her stolen camel, and she makes up her mind to go to the King and offer to pay a ransom to release the captured queen.

Then a young man, Jaffra, joins the caravan along with his father and brother. He makes friends with our heroine, thinking that she is a boy and of course Shashona falls in love with him - but she has to maintain her hidden identity.

And then things happen that make her think maybe Jaffra isn't all he says he is...

A story of romance, intrigue and daring adventure.

Someone did tell me that perhaps I shouldn't use a comic-sans font, but I think that's alright as it is nice and clear to read, plus I've had a comment that the cover is a bit bland? Should I enlarge my author name? But then I really want the title to stand out.

Excerpt:
Shashona was laying beneath her cotton blanket staring up at the sky full of blazing stars, wondering what magic caused them to burn so brightly. She knew some of their names, The Dipper, The Cross. Where had they gotten their names, she wondered? Had their mothers christened them at their birth thousands of years ago? She shifted uncomfortably, the sand hot beneath her, listening to the wind in the trees and Jaffra snoring not three yards away in a steady intake and outtake of breath every measured second. Even the annoying noise made the blood in her body feel hot and excited as it pumped around her body.
"They are like my diamonds," she thought to herself as her fingers touched the small velvet pouch tied to her waist belt where she kept them safe. "The stars are just like my diamonds."

actually written by Helen Hollick - an alternative title would be
How NOT to produce/promote a book!