A Discovering Diamonds review of The Pearl of York, Treason and Plot by Tony Morgan 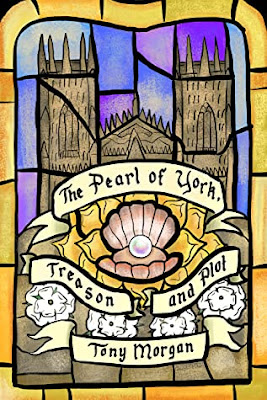 
"A gripping historical novel, perfect for the lovers of CJ Sansom and SJ Parris, set in the atmospheric streets and buildings of Tudor York. When Margaret Clitherow is arrested for illegally harbouring Catholic priests in The Shambles, her friends, led by a youthful Guy Fawkes, face a race against time to save her from the gallows. As events unfold, their lives, and our history, change forever. Margaret, known as the Pearl of York, and Guy, famous for his role in the Gunpowder Plot, were raised by prosperous Protestant families. Both became Catholic enemies of the state. What events could persuade a happily married woman to consider martyrdom, or transform a young Yorkshireman into a terrorist?"

Tony Morgan has previously written about an alternate timeline where Guy Fawkes was successful in his endeavour to blow up Parliament, but in this novel he returns to the standard, accepted history of Guy Fawkes, albeit a younger version who is at school in York.

Guy lives with his mother and two sisters following the death of his father, and attends St Peter's school in the hopes of training in the law and working for the church, the new Protestant church as his father had done. But he happens upon his mother as she creeps across the city to attend a Catholic mass hidden in the house of a butcher's wife, Margaret Clitherow, an infamous Catholic who has been in and out of trouble over her choice of religion over the past few years, also known as the Pearl of York.

A new mayor, Mrs Clitherow's step-father, doesn't bring much relief because the sheriff of York is determined to stamp out all Catholics, including Mrs Clitherow. Guy uncovers the identity of other Catholics in York, some he knows, others he comes to know, and soon he doubts his own convictions and finds himself leaning towards the old religion, and befriending priests as he joins the struggle to save Margaret Clitherow's life when the sheriff arrests her.

Morgan's previous books have certainly been interesting, the image of the world as it might have been is fascinating to many of us, but despite this novel being more straight in its approach to history, it is his best so far. Writing in the first person is a new approach for Morgan and I feel this has helped him grow as an author, removing distraction and allowing the character of Guy to shine unhindered. The attention to the detail in York is equally impressive, as the author weaves a map of the city effortlessly so the reader has a mental image of places and buildings and where they are in relation to each other.

As before with his previous two novels, the proceeds of this go to charity, a hospice in York, so that is a pretty good reason to buy it. The cover is absolutely gorgeous, if you need another reason. If Tony Morgan improves at the same rate for his next novel, it is going to be extraordinary.