A Discovering Diamonds Review of In Honour Bound by Elizabeth Bailey 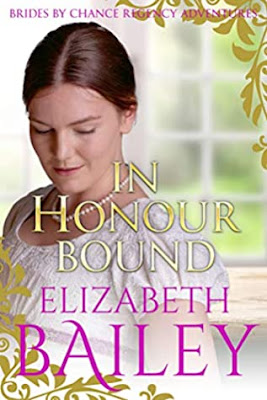 
Isolde is left orphaned after the death of her father, with a letter her only hope of a future. Her father extracted a promise from Thomas de Baudresey, his regiment's colonel, to become her guardian in the event of his death, but Isolde doesn't know if her arrival will be welcome. Things take a twist when she discovers that not only was Thomas elevated to the peerage, but he died leaving his son as the next Lord Alderton. Richard is not bound by a promise made by his deceased father towards Isolde and with her companion, Mrs Quick, returning to Ireland and with no notion of taking Isolde with her, Isolde's future looks very bleak indeed.

Rather high handed at first, Richard agrees to let Isolde stay, and insists she learns how to be a lady to calm her military upbringing. But her teacher, his older sister Alicia, who is given the task, is resentful of her new charge and sees her place as mistress of the house threatened by the newcomer.

This novel is something of a conundrum. The plot is interesting and original, and for that it is worth a read, especially if you are a fan of Recency romance, and there is enough romance to please anyone. There is action, fights, yes, really, and most involve Isolde which is quite daring for the genre. So it offers something more than the standard.

However, the author appears to have consulted the thesaurus rather more than she might, and she isn't always using her alternative words appropriately or correctly, for instance, there are no doorways, but 'apertures'. It renders the prose awkward rather than elegant. Some of the research is a little off-kilter: gun detail for instance - her heroine doesn't want to 'check the pan' in case of 'losing the ball'.

There's less sense of place or time than I would have expected; if you didn't know, the only indication of the time is that the front cover says 'Regency Adventure'. There's no mention of anything that places it anywhere specific between around 1650 and 1900. And mentioning a few place names doesn't give any real idea of where it takes place.

So, knowing it is Regency from the cover and you can translate the more fanciful of Ms Bailey's prose (she just gets the wrong word here and there) and if you like the genre, you should be well satisfied because, overall, it is a good, entertaining plot.