Echoes of the Runes by Christina Courtenay 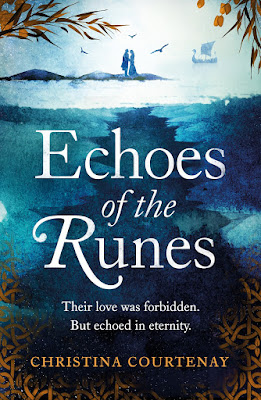 
Writing dual time-line stories is closely related to weaving—something I know for a fact Ms Courtenay has among her various skills. Maybe that is why the two time-lines merge and twist so beautifully in her latest release, Echoes of the Runes, this despite there being a gap of more than a thousand years between the story of Ceri and Haukr, who live in the 9th century, and that of Haakon and Mia, firmly rooted in the 21st century.

Ms Courtenay has set her story in Sweden, close to the old Viking settlement of Birka. What starts as an antagonistic confrontation between Mia and Haakon, when the latter more or less accuses Mia of stealing an ancient Viking ring, soon grows into a complicated story where the past reaches through time to echo in the present.

Mia is half-Swedish and has recently inherited an ancient Viking ring and an old summer cottage from her grandmother. The cottage stands on land bordering a lake—land which lies very close to known Viking settlements. Haakon is a Norwegian archaeologist, and despite the rocky start between him and Mia, he is fascinated by her ring—and the fact that her family seems to have owned that patch of land since forever. What secrets may be hiding underground?

While Haakon and Mia start digging their way literally through the past, the reader has a head start on them. After all, we’ve already been introduced to Ceri, a Welshwoman abducted from her home by raiding Vikings, Haukr—the Viking who reluctantly did the abducting—and Haukr’s more than obnoxious wife, Ragnhild.

Ceri had no intention of falling for her Viking abductor—but does so anyway. Mia does not need the complication of a tall, handsome Norwegian archaeologist in her life—but is as drawn to him as he is to her. Love, as they say, is in the air, be it in the wintry past or the somewhat balmier summer of the present. And as to what links Mia and Ceri, Haakon and Haukr, I leave that for you to discover on your own.

Other than a well-developed plot and the very likeable protagonists (Haukr is my personal favourite), Ms Courtenay wraps the whole thing in her signatory beautiful prose. I am especially fond of her descriptive passages, be it of melting snow or the beauty of a Nordic summer night. Add to this not one but two love stories and this reader is a very, very happy person!