The Deputy’s Promise by Heidi Peltier reviewed by Anna Belfrage 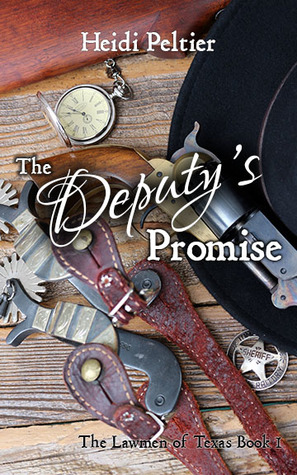 
"Ms Peltier delivers a well-constructed story, but most of all she introduces us to two beautifully developed, credible and very likeable main characters."


A good Western requires a couple of ingredients: the bad-ass outlaw, the feisty heroine and the reliable, honourable hero. Add a headlong flight in the midst of winter, a family on the brink of extinction, a budding love affair, an adorable if ugly mutt, and you have quite the galloping read, complete with great historical detail.

Ms Peltier delivers a well-constructed story, but most of all she introduces us to two beautifully developed, credible and very likeable main characters. Kat is a young woman thrown into an intolerable situation and who, somehow, finds the fortitude to struggle on. Matthew is a man bound by his promise to protect his best friend’s sister who suddenly discovers he is developing feelings for his charge—feelings he worries are in conflict with his promise to keep her safe.

The late 19th century in Texas is not the friendliest or most civilised of places. Some men use violence and fear to carve themselves a life and it is people like Matthew Garnett and his best friend Erick Carlton who must do what they can to keep these darker forces at bay. Not easy, when ambitious and greedy gunslingers ride unchallenged through the landscape, killing those who try to stop them, and things become even more difficult when the outlaw chief makes a promise to kill not only Erick, but also Kat, thereby having erased the entire Carlton family from the face of the world—a fair retribution, according to the outlaw, for those of his companions who’ve ended up dangling from a noose because of Erick and his father, both of whom are Texas Rangers.

Kat has no choice but to trust Matthew, which is why she dresses up as a boy and rides off with him. Midway through, Matthew realises he is risking Kat’s reputation. No matter that she is in disguise, she is a woman—and God help him, but what a woman she is! A woman he can easily see in his home, having his children—and to offer her some protection he arranges a shotgun wedding. Is Kat unwilling? Not really—but she is very confused by Matthew. One moment, he seems to genuinely care for her, willing to hold her and keep her warm, the next he distances himself, repeating that this marriage is for her protection, nothing more, and once things have calmed down, he’ll arrange for an annulment. Kat is hurt. Clearly, Matthew doesn’t reciprocate those strange feelings she is experiencing. Or does he?

Not only is Ms Peltier adroit at describing all this emotional upheaval, but she does so against a beautifully depicted landscape, a place where stars burn bright against the winter sky, where vast stretches of emptiness expand every which way and where the only thing standing between a man and certain death is sometimes as simple as sheer luck.

All in all, this was an enjoyable and well-written read and this reader is sure to pick up more books by Ms Peltier!