The Crystal Cave By Mary Stewart Reviewed by Paula Lofting 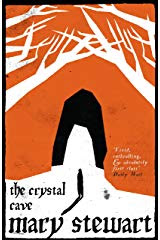 I first read this book when I was in my teens. I was totally enamoured with it then and having gone back to it over forty years later, I remember why. As each word walked onto the page, it bought back to me the memories of enjoyment and inspiration I had when I first read it.

Stewart’s rendition has more to do with making her narrative fit plausibly into a legendary framework than history and though in a historical setting that one will recognise, it is not an historical novel as such. Encompassing elements of legend, fantasy, and what was known of the Arthurian period, it is a hybrid novel so if you are expecting something more along the lines of Mallory, or something rather more historically accurate, then you will be disappointed.

There are no knights shining in their armour and there are no turreted castles, nor is there a glowing Holy Grail. What you do get is an explanation of some of the magical parts of the Merlin legend that makes sense of these fantastical tales and normalises them into a believable plot. Stewart herself makes no claim to scholarship in this era. She places her Merlin in the era that he would most likely have lived had he existed: the post-Roman period in Britannia. She utilises legend from the various versions of the Arthurian tales, mainly following Geoffrey on Monmouth’s History of the Kings of Britain and although wallowing in fantasy, we have to conclude that it gives a delightful framework with which Stewart has been able to work in her narrative.

Of Ambrosius, we know that he existed as Ambrosius Aurelianus and is first referred to in 'De Excidio et Conquestu Britanniae', written in the sixth century by the Celtic monk, Gildas, who informs us that Ambrosius led the Celtic resistance against the invading hordes of Anglo-Saxons and heartened his countrymen by his own courage. I loved the connection Ambrosius has to Merlin in The Crystal Cave and it is interesting to note that Nennius, a monk of Bangor, compiler of the Historia Brittonum, in the early ninth century, refers to two different men named Ambrosius, one being an orphan who displays prophetic powers for Vortigern, and another Ambrosius, a rival whom Vortigern dreaded. A later passage refers to him as "the great king of all the kings of the British nation." Here is where Stewart must have got her idea to give the young Merlin (in Welsh, Myrddin) an association with Ambrosius, or Emrys Wledig being the Welsh form of a post Roman warlord.  To say any more on the subject would be to give away an important aspect of the storyline, so I won’t.

The fact that this story stood the test of time and still gave me the same satisfaction all these years on, for me was the book’s strength. Not many books have been able to give me the same pleasure with such a time warp. Stewart’s ability to create powerful prose and characters, the main being  Merlin of course, whom we learn about through his first person narrative. Stewart’s beautiful words have always been an inspiration to me and back in the day, when I was an embryonic writer, she helped to sew the seed of inspiration with this wonderful series of which The Crystal Cave is the first.
‘… and before me now were the lights of a town and the warmth of its houses reaching out to meet me. It was the silent time between the thin birdsong of a March day and the hunting of the owls.’

There is so much more I could say about this book, but I must end here and make my recommendation that this book is indeed a Discovered Diamond.

(personal note from Helen: the cover depicted is for the 2012 Hodder & Stoughton e-version - have to say, I think it's awful. The original paperback is better, but that's just my opinion!)