I have been in love with words ever since I realised, at age three, that those squiggles on the page actually meant something.  Usually they meant something financial, as my banker father would listen to me reading only if I chose an extract from the Financial Times.  I edited the school newspaper (is here the place to confess that I was also the author of the section giving all the gossip on who was going out with whom?) and did lots more reading and writing at university (where, of course, I chose to study English because of its high word count).  After a stint as an English teacher, I fell out with the National Curriculum and decided to make my way as a technical writer.  I wrote about anything and everything – instructions for a choc-ice wrapping machine being a highlight – before stumbling across my true love: the subject of money laundering.  Thankfully there are enough people worried it for me to be able to make a living helping them to prevent it and I now run my own anti-money laundering consultancy.

However, the English student has never gone away and I always knew that I wanted to write a book.  And what better subject could there be than financial crime?  The things people will do to acquire and hold onto money are just astonishing, and it’s certainly not a new phenomenon.  And so in my spare time I can be found haunting the streets of 1820s London, in the company of magistrates’ constable Sam Plank.  He is the narrator of my series of historical financial crime novels set in consecutive years in the 1820s – just before Victoria came to the throne, and in the policing period after the Bow Street Runners and before the Metropolitan Police.  I love this period because there are Regency romances aplenty and more Victorian detectives than you can shake a stick at, but Regency crime fiction is rare.

So far I have written six Sam Plank novels, each focussing on a particular financial crime: bank fraud, bribery, art fraud, inheritance fraud and so on.  The hero is of course Sam himself, but alongside him he has a junior constable called William Wilson and a stalwart wife called Martha.  I mix fiction and fact: Sam works in a real magistrates’ court in Great Marlborough Street in London (just down the road from Liberty’s department store) and his boss is a real magistrate called John Conant.  I always play fair: if something is known to be true I must abide by it (so I cannot change Conant’s age to suit me, for instance) but if we don’t know, I am allowed to speculate in keeping with what is possible.  The books are growing in popularity: the fourth in the series – “Portraits of Pretence” – was given the Discovering Diamonds “Book of the Year 2017” award, while the fifth – “Faith, Hope and Trickery” – was shortlisted for the Selfies Award 2019.  But the seventh will have to be the last, as Sam will inevitably lose his job when the Metropolitan Police is created in 1829.

I cannot bear the thought of bidding a final farewell to Sam, Martha and Wilson and so I am putting off the dreadful day by starting research on a new series: set this time in Cambridge, although also in the 1820s, this series will be a five-parter narrated by a university constable called Gregory Hardiman. I just hope that Sam understands.

If you fancy trying the Sam Plank novels, you can download a free e-book guide to the series from Amazon – this has the first chapter from each book (to whet your appetite) and a little glossary of Regency language:
https://www.amazon.co.uk/Official-Guide-Sam-Plank-Mysteries-ebook/dp/B07RM3XXYV/ref=sr_1_8?keywords=susan+grossey&qid=1582291489&sr=8-8&x=0&y=0

Otherwise, all of the Sam Plank books are available in paperback and in Kindle format from Amazon; the paperbacks can be ordered from any UK bookshop; and audiobooks have been produced of the first two books in the series (“Fatal Forgery” and “The Man in the Canary Waistcoat”). 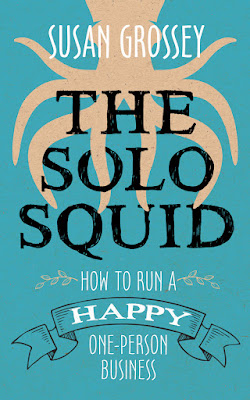 And if you’re thinking about life as an author, you might also like to read my non-fiction book on working alone: “The Solo Squid: How to Run a Happy One-Person Business” is available in paperback and in Kindle format: http://mybook.to/solo_squid

And if you’d like to read more about the history behind the Sam (and Gregory) books and take part in occasional offers, please subscribe to my monthly updates:
https://wordpress.us3.list-manage.com/subscribe?u=793a391cd9d51c99540eb5099&id=d302de6b99