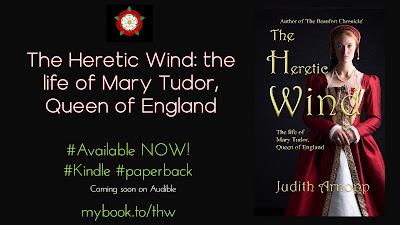 Judith Arnopp is the author of twelve historical fiction novels written from the perspective of historical women from all walks of life, prostitutes to Tudor queens. Her non-fiction articles feature in various historical anthologies, magazines and historical blogs. She also gives talks on history and writing historical fiction.

My books feature people from history: well-known figures like Anne Boleyn, Katherine Parr, Margaret Beaufort, Elizabeth of York, or aspects of Tudor history that are not often covered in fiction. I find all manner of Tudor women fascinating. The Winchester Goose is told from the perspective of a prostitute from Southwark while Sisters of Arden tells the story of three nuns who are turned out of their priory during the dissolution of the monasteries and  join the pilgrimage of grace.

All my novels encompass the problems women faced during this time; the oppression, the childbirth, and far too often, the loss of those children. In most cases, the challenges they faced were every bit as dangerous as the battlefield.

I’ve always been intrigued by the Tudor court. It is not so much the fancy clothing or jewels or the fabulous palaces but the psyche of the key members of Henry’s family. I attempt to answer the questions I’ve always asked myself: What made Henry VIII the way he was? Why has Margaret Beaufort such a bad reputation? Who was Perkin Warbeck? Why does Elizabeth of York take such a back seat?

I explore the Tudor world from the perspective of these main players. Seeing things in this way has brought me to some interesting conclusions.

Perspective fascinates me; the same person can be different things to different people. For instance, the character and motives of Margaret Beaufort alters depending on the stance of the author. Those who favour York see little good in her at all, and those who follow Lancaster cast her as a saint. In reality, she is more likely to have been somewhere in between – just as we all are.

I like to present as balanced a picture as I can. In A Song of Sixpence viewed from Elizabeth of York’s eyes, Margaret initially seems to be quite a negative person. There is usually some sort of tension between a new bride and her mother-in-law, and Margaret did hold a lot of influence and didn’t hesitate to interfere in the marriage. This could have been from the best of motives but I am quite sure Elizabeth would not have seen it like that. As the story progresses and they come to know each other better the two women are reconciled and become friends. In my series, The Beaufort Chronicle, in which Margaret narrates her own tale I’ve given her the opportunity to relate the extraordinary life she led. In The Heretic Wind, I do a similar thing for Mary Tudor, offering her the chance to vindicate her actions and shake off the inappropriate title of ‘Bloody Mary’. I haven’t tried to whitewash her though, but by allowing her to justify her decisions she emerges as more troubled than ‘bloody’.

One of the things I like most about writing historical fiction is the research. My house is full of books, medieval music, and  portraits (prints of course). I like to study the historiography of my subject to consider how he/she has been perceived by different generations. Part of my job is to visit the relevant castles, palaces, towns and even gardens that form the backdrop of the world I am conjuring. I have also adopted some medieval hobbies so I can understand how women of the era passed their time. I do (rather bad) medieval style embroidery; I make and dress up in Tudor clothes to see how they feel; how long it takes to put them on and how easy they are to rip off – ha ha!

I watch documentaries, dramas (the good and the bad), read contemporary poetry, plays etc. Research is never-ending but I love it. Only a tiny portion of the things I learn actually make it into the book but I put it to good use in my blogs, articles or talks and lectures.

My latest novel is The Heretic Wind; the story of Mary Tudor, Queen of England and it has been very well-received so far. I was intending to take a break from writing this year. Sometimes I feel really wrung out with the work but, less than a month since THW was published, and I am already plotting the next one which will be set during the time of Catherine of Aragon. Sometimes I wonder if I will ever run out of inspiration but Henry keeps me well supplied with stories.

Judith’s books are available on Kindle, paperback and some are on Audible. For more information:
Webpage: www.judithmarnopp.com
Author page: author.to/juditharnoppbooks
Blog: http://juditharnoppnovelist.blogspot.co.uk/