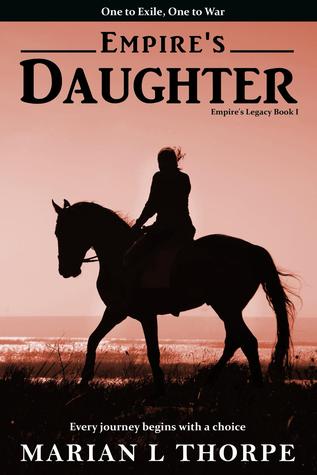 
"The whole time I was reading, I was convinced that Ms Thorpe knows every tiny detail of the empire she has created, which made what she described on the pages feel incredibly real."

"For twenty generations, the men and women of The Empire have lived separately, the women farming and fishing, the men fighting wars. But in the spring of Lena’s seventeenth year, an officer rides into her village with an unprecedented request. The Empire is threatened by invasion, and to defend it successfully, women will need to fight.When the village votes in favour, Lena and her partner Maya are torn apart. Maya chooses exile rather than battle, Lena chooses to fight. As Lena learns the skills of warfare and leadership, she discovers that choices have consequences that cannot be foreseen, and that her role in her country’s future is greater than she could have dreamed."

It's a difficult and probably daunting task to make up a world. The author has to utterly convince the reader that this new world is believable, and realistic, even though it is fantasy. So the first test of such a book surely must be to make the reader think that they are having a real world described to them. Empire's Daughter passes this first test brilliantly. The whole time I was reading, I was convinced that Ms Thorpe knows every tiny detail of the empire she has created, which made what she described on the pages feel incredibly real. The scenery, the customs and traditions, the way of life - all were portrayed so well that it felt like reading about a real time and place. It's clear that the author has done a great deal of research on several periods of history in order to make her imagined world feel so authentic.

I wasn't sure, initially, though, whether it was a place I necessarily wanted to spend time in, so far-removed was it from anything I'd come across before. But within a few pages I had settled in and felt like I was walking with Lena as she moved around the village. It was almost as if the author was saying, 'It's okay, come on in. It's new and different, but let me be your guide.'

And what a sure-footed guide Ms Thorpe is. This, the first in a trilogy, contains all the elements required of a great story: battle plans, battle scenes, a journey. But it also has human relationships, a love story, and a main character who grows and learns throughout the course of the book. It's not all about the main character though, and all the people whom Lena encounters are depicted vividly and are three-dimensional. One character, Tice, does not have a major role and yet her story affects many of the other characters. (She even has her own song, printed in full at the back of the book, which I thought was a great idea which gives a moment to pause and consider all that has been played out.) Lena's interaction with the other people in the story bring some touching moments, and the bonds she forms with them develop in a believable way. The relationship between her and her partner Maya is interesting and true to life; they love one another, but have opposing views and this leads to scenes of tender, emotionally-charged moments which really resonated. I really enjoyed this book and felt like I'd gone on Lena's journey with her. And here perhaps, the reviewer should ask whether the book passes the ultimate test: does it do its job, imagined world notwithstanding? The answer is a resounding 'Yes'. Long after I'd closed my Kindle on this particular volume, I found myself thinking about the characters and am keen to pick up the story in the next volume of the trilogy.