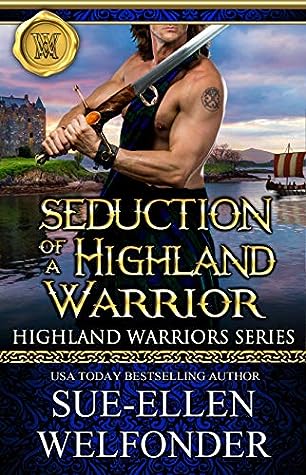 
"Ms Welfonder has crafted a satisfying romantic read which will please lovers of the genre."

"Highland Warrior Alasdair MacDonald is a fierce and proud laird, sworn to preserve the peace in the Glen of Many Legends. His heart belongs only to his beloved land – until the sister of his greatest enemy pleads his help to avoid her pending betrothal. Now Alasdair is torn, for he believes a man is nothing without honor, and he’s given the King his word. But how can he refuse a damsel in distress? Marjory Mackintosh, often called Lady Norn, will do anything to unite the glen’s warring clans. But a dangerous new menace now threatens her beloved hills – and her. She is certain her husband-to-be has no intention of marrying her. She believes the Norse warlord coming to claim her has a nefarious plan: one that will end her life. Such a fate is one that Alasdair cannot allow to happen to the woman he secretly desires. Yet giving her refuge – even if he vows not to touch her – will risk the fragile peace in the glen. And the King has ruled that all three glen clans shall be banished if unrest erupts again. Alasdair and Marjory must prove that a worse danger than clan feuding is about to descend on the Glen of Many Legends. As Alasdair prepares for this new battle, Marjory readies her own. She’ll use seduction to convince Alasdair that sometimes the greatest triumph isn’t won by the sword, but the heart."

A classic romance read featuring a handsome hunk and a beautiful woman - the typical Historical Romance cover of the broad, beefy bloke clad (despite the cold wind and wet weather) in little but his sporran and a hefty broadsword, gives the game away regarding the genre.

The Historical Romance novel often contains little history and a lot of romance. Not knowing much about Scottish historical detail for the fourteenth century I cannot comment on the accuracy for this novel (although I do query the Viking presence and the Longship on the cover?) but accurate or not, the whole point of a romance is just that - the romantic (and the usually complicated) relationship, between the hero and heroine of the tale. Seduction Of A Highland Warrior fits that particular bill very nicely indeed.

This is part of a series, but I don't think it matters if the others have not been read - I've not come across them, but there was enough in this tale for me to understand the characters and what motivated them.

In Seduction Of A Highland Warrior, Ms Welfonder has crafted a satisfying romantic read which will please lovers of the genre. She has nicely blended in the ancient folklore of the Scottish Highlands with the obsessive drive by the bad guys for the wielding of control, greed and power at all cost, regardless of who - or what - gets in the way. While for the good guys and gals, the struggle to survive leads along treacherous paths where danger, suspicion and mistrust abound - but desire and love provide the ultimate goal.

We have the strong, honourable hero Alasdair MacDonald who will do anything for the greater benefit of his clan, and who, of course, is torn every which way by his love for the feisty, strong-willed Marjory, who is betrothed to a man she does not wish to marry.

Add to this the subtle blend of magic and superstition, the ghosts who roam the misty, quiet glens, and the mystical pull of an amber heirloom and you have everything you need for a satisfying romantic read.