A Discovering Diamonds Review of Fanny Newcomb and the Irish Channel Ripper by Ana Brazil. Reviewed by Cryssa Bazos 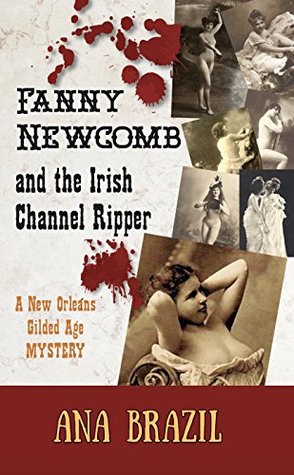 
"The author doesn’t imbue her characters with modern sensibilities, but she does capture the spirit of these pioneering women. "

A young Irish woman is found dead in the Irish Channel quarter of New Orleans, and all the newspapers are claiming it’s the work of a Jack the Ripper-like murderer. According to the accounts, the woman had been slashed to death, very like the Whitechapel murders back in London. New Orleans is in panic. But Fanny Newcomb and her employer’s sister, Dr. Olive Giddings, were first on the scene and it was clear to them that the woman was strangled, not slashed. So why and how did the newspapers get this detail wrong? To make things more complicated, they know the victim, a promising Irish girl who was one of Fanny’s business students at the Wisdom Hall Settlement House, a school run by Sylvia Giddings.

While they are dealing with the shock of losing one of their students, the school becomes further embroiled in this mystery when their carpenter is arrested for murder. None of these ladies believes he is responsible, but their school and his life are at risk if they can’t prove it. And so the game is afoot, leading us through the underbelly of New Orleans into the sordid world of prostitution.

Fanny Newcomb is our intrepid investigator, although Olive and Sylvia are also keen to solve this mystery. She is a woman of intelligence, gumption and dogged persistence. She has a gift for investigating that she honed while assisting her father in his legal practice. After he passed away, her father’s partner offered her marriage, but at the cost of abandoning her work. Fanny is the type of character driven to prove herself, determined to be accepted as an investigator and the equal to men in the field. She may take risks that occasionally endanger herself and others, but she is a thoroughly sympathetic and likeable character because of her drive and persistence. I loved how we are given glimpses of Fanny’s past through tidbits of information that are sprinkled throughout the story. Far from being an 'info dump', they are fed to us as the story unfolds and in such a way that the details further flesh out Fanny’s character. There is the feel of a larger story behind Fanny, and at one point, I wondered if there were earlier Fanny Newcomb stories I had missed (this is the first one).

The other two central characters, Sylvia and Olive, are also well-drawn and do their part to uncover bits of the puzzle. Both are strong, intelligent women, who are equally determined to lead a life of their own making. This is the Gilded Age when women were starting to challenge male exclusive professions to become doctors, business women, and media owners. The author doesn’t imbue her characters with modern sensibilities, but she does capture the spirit of these pioneering women.

The mystery has many twists and turns with several possible suspects, and the author kept me guessing until the end. The setting was unique and added to the story and I really enjoyed learning about New Orleans. Fanny Newcomb and the Irish Channel Ripper is an excellent historical mystery and one that I can warmly recommend.