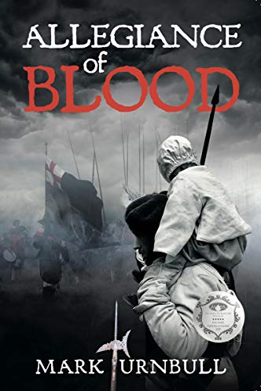 "Turnbull knows his subject inside out"

"Sir Francis Berkeley strives to protect his wife and family from the brutal effects of the English Civil War. But aside from the struggle between king and parliament, the allegiances of family, friendship and honour entangle him at every turn and prove to be just as bloody.
As a witness to treason on the field of Edgehill, Francis is drawn into a fast-moving world of espionage and politics. Against a backdrop of some of the major battles and sieges, Francis’s fight to reunite his family opens up very different conflicts with which to contend.
Everything is at stake when the war comes to a little church one December morning. Can the family survive the parliamentarian onslaught as well as their own feud?"

Mark Turnbull’s novel Allegiance of Blood chronicles the difficult decisions and tragic events that befall relatives and friends forced to choose sides in a civil war. In this case it is the English Civil War, about which the author knows a very great deal. From battle strategy and inter-faction political backstabbing, to what civilians wore and what they ate, Turnbull is in full control of his subject. The story follows the progress and set-backs of an honourable Royalist, Sir Francis Berkeley, whose sister is married to a Puritan zealot and whose mother-in-law is...well, that would be a spoiler, but she is most men’s idea of the mother-in-law from hell.

The novel opens with Sir Francis Berkeley lying wounded on a battlefield. But for a kind-hearted woman who claims him as her husband he would probably have died there. As it is, what Berkeley witnesses in his agony leads to another honourable man’s death. This second man, also a husband and father, is named Harbottle. Believing the war to be wholly wrong, Harbottle is liaising between the warring armies in an attempt to limit bloodshed. Berkeley chooses to see this as spying and treason against the Royalists, but not long after Harbottle’s execution he learns his own dear friend Jackson is involved in espionage for Parliament as well. Berkeley is tasked with contacting Jackson, and soon comes to appreciate the hidden difficulties of civil war.

Unbeknownst to Berkeley, his own mother-in-law is also caught up in passing information to the enemy. This is the principle thread linking the multiple points of view in this debut novel. Chapters swing in and out of the main storyline, showing the progress of the war and how it affects disparate people, from the monarch himself to a nurse-maid whose only desire is for a secure home and employment.

As mentioned above, Turnbull knows his subject inside out, which at times is a little hard on the reader who doesn’t. A character list showing who’s who on the battlefield would have been appreciated because not all noblemen were fighting for their king. Nevertheless, Turnbull’s excellent ability to depict seventeenth century English towns and terrain provides for solid background. His familiarity with battle strategies also means the reader has a better awareness of the outcomes. The more domestic yet nonetheless traumatic aspects of Berkeley’s war with his mother-in-law and his attempts to protect his family are handled in a convincing manner and one fears for his wife and child from the outset. Underlying all these conflicts, national and domestic, is the ever-troublesome matter of religion. The desperate and frightening scenes in the church at the end of the story are, therefore, all the more tragically ‘right’.

This is a very good book but it is slightly affected by the typical 'debut novel syndrome' of too many points of view and occasional deviation from the main storyline because of it.  I would recommend that the author uses a more stringent technical editor for his next novel. Nonetheless, it is well written, has very good descriptive writing and in its way quite an important book, demonstrating how civil war can split friends and family apart. It is also a very 'visual' book: one of those novels that reads like watching a film. Highly recommended for anyone interested in the English Civil War, and for those who enjoy behind-the-scenes and beyond-the-battlefield war stories. Mark Turnbull shows how civil war is perhaps the very worst sort of war.