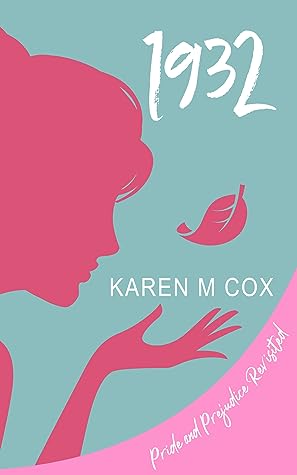 
"During the upheaval of the Great Depression, Elizabeth Bennet’s life is torn asunder. Her family’s relocation from the bustle of the big city to a quiet family farm has changed her future, and now, she must build a new life in rural Meryton, Kentucky.
William Darcy suffered family turmoil of his own, but he has settled into a peaceful life at Pemberley, the largest farm in the county. Single, rich, and seemingly content, he remains aloof—immune to any woman’s charms. Until Elizabeth Bennet moves to town. As Darcy begins to yearn for something he knows is missing, Elizabeth’s circumstances become more dire. Can the two put aside their pride and prejudices long enough to find their way to each other?"

I will be honest, I am not sure if I enjoyed this novel as much as I could have done... yet I found myself turning the pages, intrigued to find out what happened next, and discovered at the end that I had been entertained by this set of characters and the author's new take on a familiar tale.

The USA, Kentucky, 1932. Prohibition is in progress, times are dire for many a family, the poor have their problems, and so do the rich.

The Bennets are financially in trouble and have moved to the town of Meryton in Kentucky in order to scrape a meagre living through the Depression. Mr Darcy is a well-to-do farmer who lives with his sister, Georgiana. Lizzie goes to work for the vet, her uncle, Jane works in the store which is owned by a Mr Bingley who lives with his aunts Louisa and Caroline.

The plot vaguely follows that of Pride and Prejudice, although some of the familiar characters are more prominent, others less so. Some for the better, others not for the worse, but perhaps a little disappointing in their lesser roles? I did find it difficult to picture Mrs Bennet as a farmer's wife pulling her weight where work was concerned, for instance, and Mr Collins only had a small part as the town librarian.

I did not always feel immersed in the 1930s period, maybe not enough description of time, situation and place? I can't help wondering whether it would have been better had Ms Cox merely borrowed the plot and developed her own set of unique characters, not used those from Pride and Prejudice? I think it would have worked, because the author has the writing and creative ability to blaze her own path... But having said that, this was a new angle in a very different setting put together as an entertaining read. Which, at the end of the day, is the whole point of a good story. If it is an overall enjoyable read then it's a worthwhile read - and yes, this was enjoyable and worthwhile and this alternative view of the characters will give Jane Austen fans something to mull over.