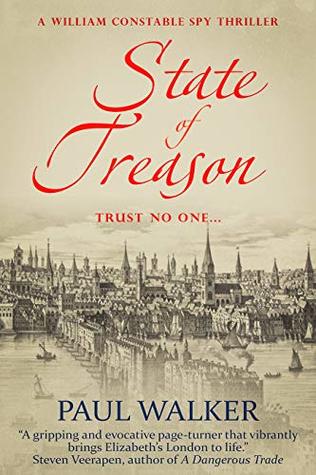 "This was a fascinating novel, the alchemy of the combined astronomical and medical detail worked well for a thriller that oozed Tudor espionage"
#DDRevs Historical Fiction Reviews

Note: we try our best to leave a 4 or 5 star comment on Amazon.co.uk and .com - alas Amazon is often not as openly supportive to authors :-(
We suggest you add the above quote to the information about the book.
Our comments ARE successfully left on Goodreads, however.

"London 1578 - a cauldron of conspiracy, intrigue and torture. The might of Spain and the growing influence of the Catholic League in France all threaten the stability of Queen Elizabeth and her state. William Constable, a physician and astrologer, is summoned to the presence of the Queen’s spymaster, Sir Francis Walsingham. He is charged to assist a renowned Puritan, John Foxe, in uncovering the secrets of a mysterious cabinet containing an astrological chart and coded message. Together, these claim Elizabeth has a hidden, illegitimate child (an “unknowing maid”) who will be declared to the masses and serve as the focus for an invasion. Constable must uncover the identity of the plotters, unaware that he is also under suspicion. A connection to his estranged mentor, Doctor Dee, comes under scrutiny. Pressured into taking up a position as a court physician, Constable becomes a reluctant spy. Do the stars and cipher speak true, or is there some other malign intent in the complex web of scheming? Constable becomes an unwitting pawn, in a complex game of thrones and power."

Scheming and intrigue, plots and counter-plots, spies and traitors - and an interesting protagonist. All ingredients for a good read.

This was a fascinating novel; the alchemy of the combined astronomical and medical detail worked well for a thriller that oozed Tudor espionage and the exposure of traitors all fuelled by the beliefs of religion, greed for power and personal ambition.

The research seems well done, with the end notes giving an interesting account of the factual side of events of the period, and the protagonist himself, William Constable, proving to be a likeable and interesting character. A good start to what promises to be a good series.

Not all readers will take to this novel, though, as it is written first-person present tense which is often off-putting for some. However, if Hilary Mantel went down well for you, this one will be equally as appreciated.

tomorrow:
Our Book and Cover of the month selections
will be announced